Leyla…Supposedly a Basenji/Aust. Cattle Dog
This topic has been deleted. Only users with topic management privileges can see it.
S
S
soybot Reply Quote

Now I've never owned either breed before, but I did do some research before adopting her and I'm really not seeing the Australian Cattle Dog. She's about 9 months old, 25 pounds, seems to have the build of a Basenji for the most part…Tan with white on her neck and chest and a little bit of white on a couple of her paws. She's got big ears but they're floppy. Tail is the same size and shape, curls a bit but not all the way on her back.
Personality wise, she gets big bursts of energy and is VERY persistent. She spends a decent amount of time cleaning herself. We've had her since Friday and she already knows "sit" and responds to her name, so she's clearly going to be a very fast learner. While she is energetic, she also is a total cuddle-monster and seems to like to veg out. When the humane society told us what mix she was we were expecting an overwhelming amount of energy but thus far it's been a pretty expected amount of energy for any young dog. She does bark--it's almost similar to a beagle or terrier's bark. We have two cats that she seems interested in but not aggressive towards whatsoever and doesn't chase after them or anything. She's met a few other dogs and initially barks when she sees them from far away...Seems a little nervous when she meets them but is fine. She has loved every person she has met so far. I will post a few pics below but would love it if anyone could give me some clues just for fun of what other breed she might be, since I really don't see any traits unique to ACDs. 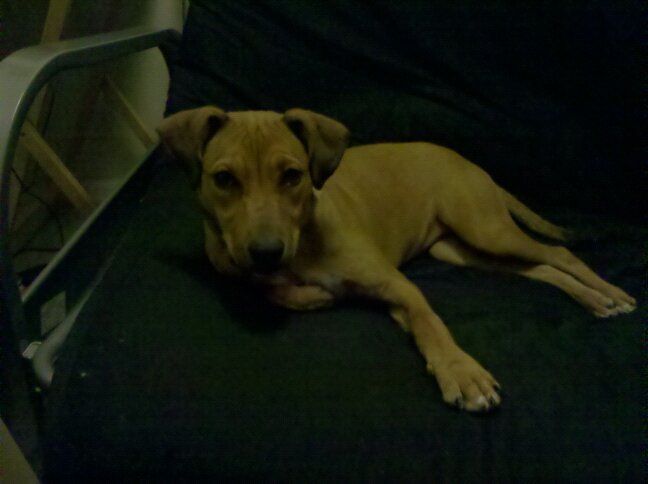 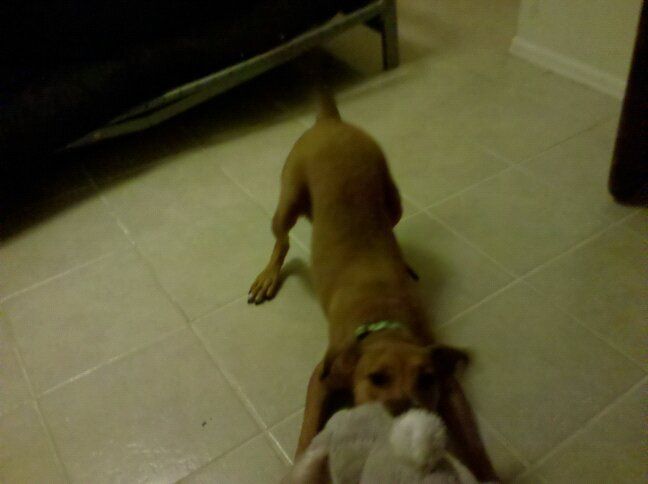 playing with her bunny 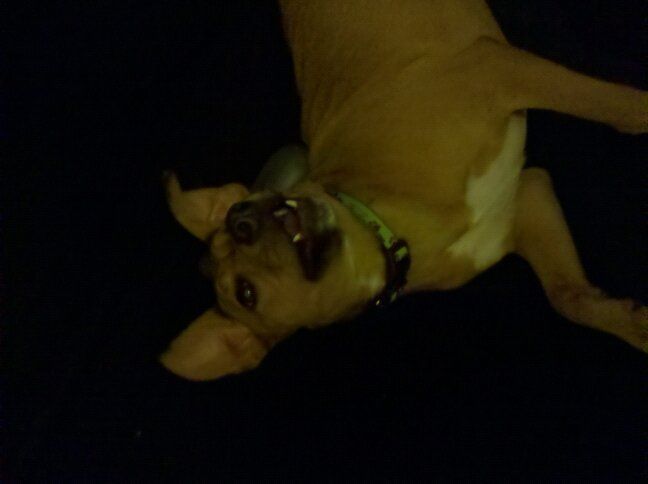 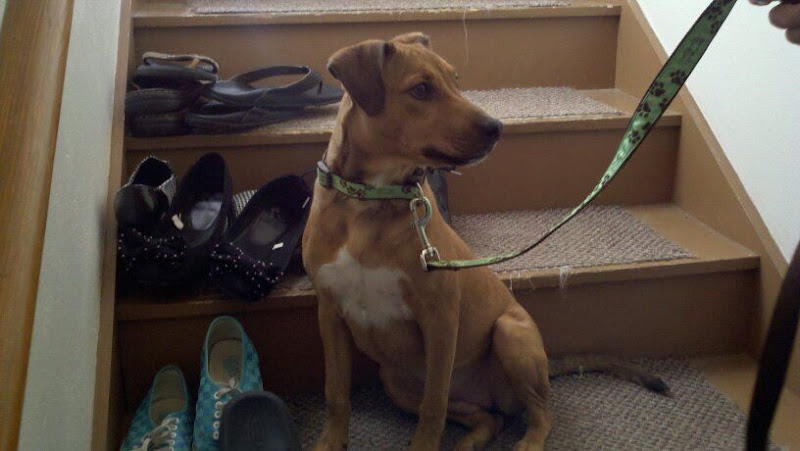 She is really cute, but I don't really see the Basenji

She's a BEAUTIFUL dog, but honestly, I don't think she's Basenji OR ACD. I'm very familiar with both breeds and I don't see any visual similarities at all.

Maybe a Staffordshire? Or a Shepherd? Ridgeback, even? Just curious, why did they think she was a Basenji cross?

she's super cute, but i also don't see any basenji or ACD. maybe a shepherd/jack russell terrier cross? at any rate, she is adorable! there's also a dna test that you can do for fun just to find out what all she might have in her. i don't think they're 100% accurate, but it could be fun. here's one site that sells the kits for about $70, but there are other companies as well, just google 'dog dna test.' http://www.wisdompanel.com/

See she's only 25 pounds but is almost or totally full grown…so a Staffordshire or sheperd seems extremely unlikely. She also doesn't really have the build for that kind of dog...she is slightly broader than a Basenji would be, especially in the middle, but isn't super muscle-y. I agree that the Basenji doesn't really translate in photos well. You'll have to take my word for it that when I hold her ears up, that combined with an almost constantly super-wrinkly forehead (that isn't in all of the pictures, I know) makes her face look very similar to a Basenji's, though I know that doesn't automatically guarantee what breed she is.

I honestly don't know how the Humane Society and their vet staff determine the breed but I would like to have a little faith in them since they are normally very accurate and specific and hope that they would get at least one breed right in her mix (and again, I'm not finding any traits of an ACD)

Today at the park she was pointing a lot and her bark is similar to a beagle's so we're starting to wonder if she has beagle or some other kind of hound in her. It would explain her build and the fact that she has a very subtle outline of darker fur above her eyes. Or who knows, she may just be a through and through mutt with all kinds of breeds in her heritage

Like I said though, I'd be very surprised if this particular Humane Society was that blatantly wrong about her. We're not too concerned regardless so while a DNA test may be in the distant future just for fun, we will probably stick with just getting the vet's opinion when she has a check up this week.

Thank you for your opinions!

Whatever she is Devon, she is a pretty little thing and i'm sure you will have lots of fun with her.

Whatever she is very pretty and i'm sure she doesn't care what breed she is!

I think she has a bit of a Manchester head.

Here's another pic of Leila 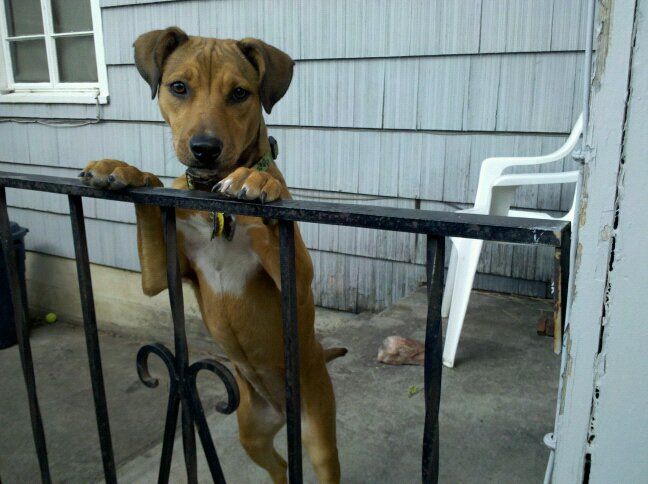 She had her first checkup at the vets the other day. His verdict was that she is definitely a Heinz dog, but also definitely has Basenji & Beagle in her, as well as most likely some lab and a terrier of some sort. We have been noticing some Beagle so it was nice to have our thoughts confirmed. I googled some pics of Basenji/Beagle mixes and she does look very similar to me in appearance and build. Some day we may splurge on a DNA test but for now the guessing game is fun and we love her regardless

She is cute..make sure you get her into a gentle basic obedience class. It will make her a bettter dog for you!

Regardless of what she is, she is your girl and is super adorable. Kudos to you for giving her a forever home!