Hello From Greg in Morgan Hill, CA
This topic has been deleted. Only users with topic management privileges can see it.

Hi, My name is Greg. I joined last year, but haven't posted until now. I initially came to the site after my rescue Basenji, Jengo had a nasty nasty stroke followed by a nightmarish seizure. I was looking for guidance about Basenjis and stroke recovery, and information about seizures in Basenjis. The health section was pretty informative. I was also successful in connecting with Pat Fragassi, who was extremely supportive. Something that I'll never forget. Thank you, Pat.

Jengo ended up in ICU for 5 days, but we saved him. Although, we had to teach Jengo how to walk again we were elated to have our little man back in the house. It didn't feel like a home without him. The following months were filled with triumphs and set backs. We celebrated the triumphs, and just... regrouped and started over following the setbacks. In a way, the setbacks were triumphs because we still had Jengo. As time went on... as hard as we tried... we could see Jengo slipping away. Kidney issues with the anti seizure meds, blindness from the stroke, eyesight failing in his other eye. Loosing muscle mass even though we walked him two and three times a day. Very heartbreaking.

I had to carry him home several times after we'd walked a little too far and it exhausted him. Sometimes just to the end of the park in front of our house. I had to carry him outside to do his business. Often at 12, 2, 4, and 6 am. Frustrating, but we still had him. Sometimes we'd spoon feed him if he was having a bad day. I suppose... as I look back maybe it was selfish of us to let him live that way. I don't know. But, if given the chance again, I don't think I'd do it any differently. I loved that little dog so much.

We lost Jengo early in July. I don't think I can express the grief we felt when he died. I've had dogs my entire life. I've sat with with some of my favorite dogs and cats while they were euthanized. This one was different. Although he was never the same following the stroke, we all fought hard for him. He fought hard. We left California in our RV almost immediately. It was much too painful to be in the house without Jengo. We headed for Colorado to spend some time with my parents, who are in their 80's. It helped keep our minds off of losing Jengo, but not completely. I wake up several mornings a week dreaming of Jenga Jeng. Still do.

Boy he was a fun entertaining little Basenge, as we called him. He had a plethora a pet names. He demanded attention. Maybe required it is a better description, but we adored that dog. He'd climb up on window sills, onto set tables, sleep in the bed, not on it. He destroyed a pillow one day when we ignored him. he could surgically remove tags from pillows and clothing without any damage to article itself if that suited him. He destroyed window blinds and curtains he couldn't see through. He chewed through anything leather if you left it on the floor. We never hit him. Never yelled at him. It took him a while because we're dense, but Jengo was eventually very successful in training us, his monkeys, how to service and please a Basenji. He went everywhere with us in the RV. I'd bet he's seen more of the Western United States that most people.

We were lucky enough to get Jengo from Karen and Chuck at Medfly when he was about 4 to 6 years old. We were even luckier to share a home with him for 8 years. I say "share a home" and not "share our home" because it was his home as much as it was ours. His presents made it home. Weird year 2020. 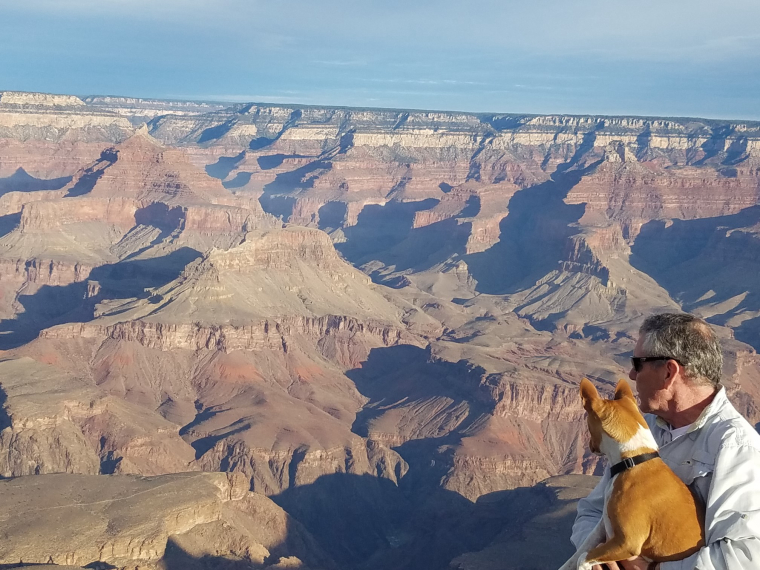 Cherish the lovely memories you had w/ Jenga. Your story brought tears to my eyes. It is truly evident that you loved your basenji and I’m sure he knew it. So sorry for your loss. BTW - fabulous photo of you and Jenga!

@jengosmonkey Thank you for sharing that. There's no doubt that Jengo experienced the best life has to offer a pup. You were (all) blessed to shared time together. I hope your next Basenji can feel the love of his presence.

I feel a bit disingenuous waiting till now to post... after Jengo had passed. Thinking about why that is... after Jengo's stroke when I discovered the this site I was looking for insight into Basenji health and treatment issues. I suppose I could have participated and detailed Jengo's journey, but I was too focused on his recovery and having him back in the house.

So why now? There's still this huge hole that's left. He required so much attention and care, and now... nothing. He's just gone. I suppose I was just looking for a place to grieve and remember him. That and I just got his paw print back back. I could see the finely detailed ridges in his pads. Anyway, thanks for letting me blather on.

@jengosmonkey Most of us understand the emptiness of loss. Blather away!

Thank you for a beautiful memorial to a special basenje. The photos tell it all.
You will see Jengo in the corner of your eye around home and familiar places. It will hurt a lot for a long time. Getting another basenji will help, but don't do it too soon. I can't imagine owning any other breed.
It always helped me to remember that my b will be waiting over the bridge for me.

I understand your feelings completely. I've been there too many times myself, but some just get into your heart in a way the others never do. I will always remember encountering my husband wandering around the yard aimlessly after we lost our Sunny. He looked at me and said, "it's time to walk the dog.....but there's no dog" and we both started crying. Only time can heal, and even then the tears come when you remember the loss. But the smiles are there too, when you remember the good times.

What a beautiful tribute.
I'm so sorry for your loss. I'm so sure he knew he was loved, the most important thing for a dog to know

Basenjis are wonderful dogs for the right people. I love mine even though he has a mind of his own. He is getting up in age and the thought losing him breaks my heart. I am so sorry that you lost yours.

I understand your grief. It runs deep and you think every morning, ‘how am I going to face the day without my monkey?’ But you do, and think to yourself, ‘is this hole in my heart ever going to decrease in size?’ It’s been 7 years and although you can’t drive a Mac truck through the hole in my heart, it still remains. I like to think that my little guy ‘took’ that piece of my heart with him to heaven, so when my time comes he’ll easily find me. Some days it’s what keeps me going. This is the place to find kindred spirts that understand, he’s not just a dog!

I am so sorry for the hole in your lives. My basenji is only 9 months old, and I am still learning how much he has brought into my life. We are truly blessed to have these "one of a kind" relationships in our lives. I am thankful you had yours with Jengo.

Dear Greg-I know what a hole these curly tailed little clowns leave in your heart. Jengo was well loved and obviously adored you. God bless both of you.

Thank you so much everyone for your thoughts. Posting here, going through all our pictures to find his and posting those... it's been really therapeutic. I remember after we first got Jengo and my son had fallen in love with him he asked me why dogs don't live as long as us. I told him that that was just part of the contract. Our dog loves and entertains us, yet we do the same knowing that more than likely we will live longer. I coached him to enjoy the time we have together, take care and protect him, and not to worry about the rest. Sure is easy to say.

My previous pup was a rescue as well. He was my bachelor dog. I rescued him when he was ten months. I sat with him on my lap as he was put down at fourteen and a half. Loved that dog. Took almost five years before I was ready to get another. I was concerned that I'd forget Muddy Buddy, or that I might not bond well with a new pup. Both concerns proved wildly untrue. I enjoy and miss having a nose in the house. I won't wait that long again.

I have a few irons in the fire now. So, we'll see where the trail leads.

@jengosmonkey
Thank you for sharing the memories and photo.
Alas, the more special the dog, the greater the loss.
Jengo was indeed one of a kind and may the flood of memories bring you solace.