I'm smart, I can learn to drive
This topic has been deleted. Only users with topic management privileges can see it.

We have a driver education business in Oregon and during one of our recent video shoots we had to bring Zaki along. We have him buckeled with a harness in the back seat so while we were filming he began to - cry, yodle - wine, you know. So once we started taking shots of him he settled right down. Now when ever we go any where he jump is the front seat with his paws on the wheel as if to say, OK, where do you want to go today. He is a character for sure.! 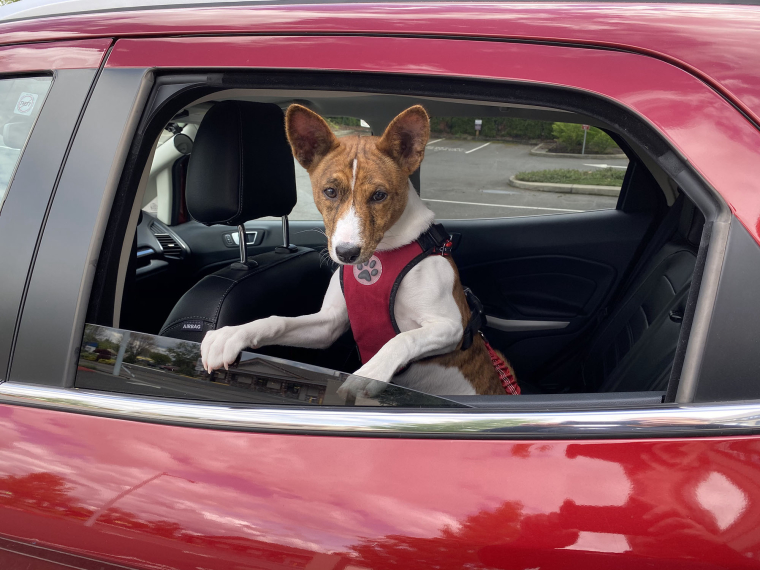 Is he a brindle? Looks like one; although, what do I know? I’ve never actually seen one. He’s a fantastic looking guy! Fun that he talks to you too.

@slents
Zaki has gotten so big! He is a cutie!

With wrinkles comes wisdom. He sure has a lot of them! He looks so cute. I imagine he would not obey the speed signs, however.

Officer: Whoa there, big guy! What seems to be the hurry?

I'm pretty sure Basenjis ALL know how to drive....they just don't want US to know they can!!!!Your Zaki is so handsome!!!! What a doll!!!!

elbrant Reply Quote
This post is deleted!
last edited by

@jengosmonkey He is. We lucked into getting him. Someone in CA wanted a Besenji and when they got up here to Oregon and saw him and that he was a Brindle, they said no to the breeder. Like I said, lucky for us. We love him.

@slents Different tastes I guess. I like yours. I’ve only ever seen photos of Brindle Basenjis, though I have seen Brindle Boxers in person. When ya get minute, please post a few side shot pics without his harness. I’d love to see his stripes. I love his face and ears. I imagine that he’s quite a character and very entertaining.

Brindles were very contraversial in this country when they first arrived. The Kennel Club wouldn't acknowledge the colour and it wasn't admitted into the Standard for quite a while.

One brave judge gave a CC to a brindle, before it was a recognised colour.

I admit I wasn't keen on it, but surprised myself in Germany when I judged their specialty, by finding brindles for many of my top winners. Heads were universally better in them and movement was (almost) back to true Basenji gait. Something rarely seen these days, anywhere. And I have judged in quite a few countries. . .

I put it down to the fact that, as they were very recent imports from Africa, humans had had fewer generations to mess about with them and they were still far closer to the old fashioned Basenjis I prefer !