Naming my Basenji
This topic has been deleted. Only users with topic management privileges can see it.
M
M
Mike67 Reply Quote

I need some opinions on a name for newly acquired little girl. My previous little girl passed in October 2017 and the devastation as you can imagine, was terrible. Her name was Cleo. This October, I adopted another B, a tri-color the same as Cleo. She's 1/2 African Basenji so initially I was trying to name her based on her heritage. I came up with Akila Grace so far. I also thought of naming her Shadow only because she is just that, my shadow. She literally follows me everywhere. Another name that really has no African connection but is cute and easy to say is Skeeter. Anyone have any thoughts on these names?

All of those names are CUTE! The right name will hit you - I'm sure. We acquired our basenji from the breeder @ the age of one (she was a "return" dog) she was already named Kembe ( supposedly an African name meaning -"Thumbprint" due to the fact she has a thumbprint marking on her neck. We call her "Kemberley" which fits her perfectly because she is such a feminine princess of a dog. I'm sure you will select the PERFECT name for your basenji!

@mike67 My girl was called Mbera because that is the Congolese name for Piano. She was a Tri and her photo is in my profile. She was about 9 months old and she was chewing on a stick! I never used her Congolese Name but did call her Antigone because like her namesake, she refused to negotiate. Since nobody could properly pronounce her name I called her Tiggy. When she passed it felt like I had lost my child.

Eventually they seem to sort of name themselves. The right one will feel right. My daughter named our first one Sayblee. She took weeks to decide (9 yr old) and drove me nuts.

2nd one I named Arwen (yeah Lord of the Rings). She didn't ROOOO properly, she said RRRRR. So the ARR wen fit.

Cara I named for a character from the Sword of Truth series.

Our Samoyed was harder... my daughter wanted to name him Moose (pamplemoose... french for grapefruit) but we had just lost Merlin and her dad and I kept calling him Merlin and being sad so she changed it to Spencer (Criminal Minds). Oddly, after a month, we just eased back into Moose.

So try a few out, see if they fit the dog, if they trigger happy or good responses. Dogs adjust... so if you go through a few names, they don't care. They are attached to being called, not what name you use.

Akila Grace is lovely.
Shadow is cute.
Skeeter reminds me of mosquitoes or the aliens from Fallen Sky.

The only one that will know the RIGHT name is you. Do we get pictures of her?

I'll do photos soon on here. For some reason, sometimes I can't share photos th my clipboard then paste. I'll have to go to my laptop.

Just personal but Akila Grace seems elegant and quite wonderful. Gets all of my votes.

Hi Mike67, I'm liking Skeeter coz I like shortened names. Our B's registration name is Cotterpin/Sweet Child O Mine (swedish line) and the breeder called her Izzy (in honour of the Guns n Roses band member). Our B's brother is Axel. Now, I just couldn't go with Izzy as I was never much into Guns n Roses so I called her Pippi (Long-stocking - and she has lovely white stockings too). Akila reminds me of the Queen song 'she's A killer queen (Akila), gunpowder laser beam' . If your dog is called Akila Grace, then calling her from across the park might be a mouthful. Have fun finding a name and, Im sure, she'll end up with the right one!

Here's Pippi at 6 months with those stockings. 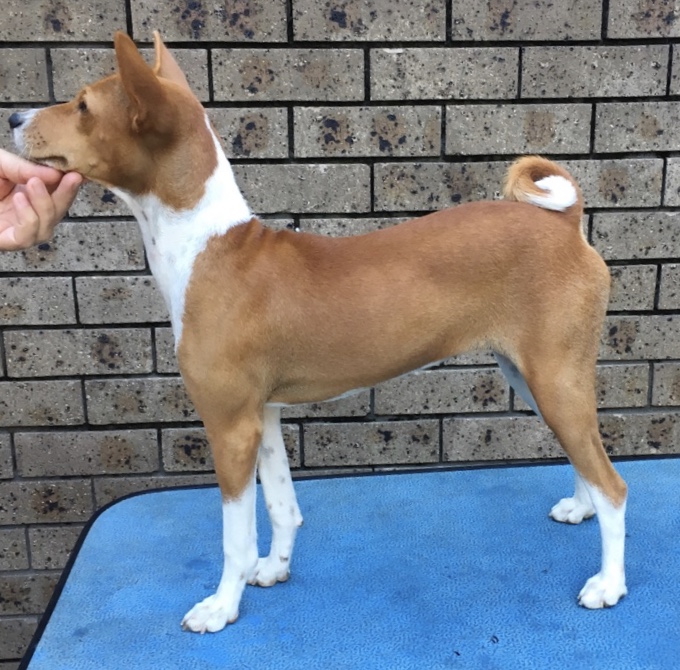 Your basenji is beautiful!

Basenjis in my house always seem to name themselves. Call names, that is. Hoover - that is what she does. Could also have been called vacuum cleaner. Keeper - because he was the one we kept. Their dam - Trouble - was a tri and did she ever know she was special !

The registered names of all of ours is a Swahili word which describes the character or attributes of a Basenji.

Best is two syllables - for when you are calling them to you and they are playing deaf.

I agree, dogs tend to name themselves. Regardless of what you decide to name them, a nickname may appear and become the most used name. Some of my dogs went by a shortened version of their registered names, some did not. And of course some got called very uncomplimentary things on occasion!

@eeeefarm said in Naming my Basenji:

some got called very uncomplimentary things on occasion!

Yeah ! But I didn't mention those ! (People might wonder what the Bs had been doing to deserve such names !)

One of our sisters is called Bintu (Swahili for daughter - Binti for calling her). The other one's official name is Elinor (Arabic for light of god). To find a short name that was connected to that, we went from Elinor to Eleonora (the European version), and from there to Lela (Spanish abbreviation for Eleonora). And a Lela she is 100%.