Prey drive with small dogs
This topic has been deleted. Only users with topic management privileges can see it.

So, in your situation, the problem is that leashing and removing the dog from the situation is negative punishment that he may or may not associate with what he did. By the time you intervene he may not connect it with his behaviour, and even if he does it can work against you because next time he may "evade capture" when he knows he has done something to displease you. Positive punishment after the fact, which seems to be what the Doberman owner was suggesting, is inappropriate and unlikely to work. Immediate positive punishment, if you can pull it off, does work but timing is critical. Dog parks are tricky situations, and sometimes the only safe option is to avoid them or in your case at the least avoid them when the tempting fluffy pups are around. The onus is on you to keep the fluffys safe, and if you can't then you need to stay away.

If you are set on using the dog park, I think you should work on your recall so that your dog is likely to come when you call. This is a particularly difficult thing with hounds, and with Basenjis it can be hard to get a reliable recall, but personally I think it is essential if you are going to let him off leash unless you can control his surroundings. An e-collar (shock collar) can be helpful to teach a recall, but I do not recommend it unless you are committed to learning to use it properly, which would NOT be for positive punishment, but rather for the aforementioned negative reinforcement (a low level stimulus that goes away when he responds correctly), and you do need to know how to train this effectively. The only time an e-collar should be used at higher stim levels is to protect the dog by breaking his concentration if he is chasing something into danger, and then only momentarily. And yes, if you use it this way it will hurt and he will likely yelp, but it generally gets his attention so you can then recall him. E-collars have a bad reputation because people use them inappropriately. For that reason, I generally avoid recommending them, and I only brought it up on this thread because you mentioned it, and therefore must be considering it. Do not go there unless you get some instruction in proper use.

@dogdad - Pretty common in my experience that Basenji will chase small "fluffy" things... remember they are a hound... and the chase/catch is bred into them. BIGGEST reasons that I do not go to dog parks and especially not to the small dog side. In this case I do not agree with eeeefarm in using a e-collar... even if used properly (and that is up for discussion) ... and IMO I would stay away from dog parks... Have you tried him in the large dog side? Again, this is exactly why I would never and never have used dog parks...

I'm with tanza on this, better to avoid the dog parks, but if you must then use the large dog side if there is a choice. And although I have used an e-collar for safety when I took Perry for off leash walks on the farm or in the forest, I would be wary of using one at an off leash park. Too much chance of confusing your dog if a fight broke out. In Perry's case I would never have considered exposing him to other dogs, as he was quite dog aggressive.

@eeeefarm @tanza Thanks for relaying your insights and expertise. I’ve been away from a keyboard and will continue to be for a few more days. Will respond more fully once I am on a keyboard...

@eeeefarm Thanks for clarifying the the terminology.

I had stopped bringing treats to the dog park for the obvious reasons, but over the past couple weeks I've been re-training Aten's recall at the dog park. (This dog park does not have large and small dog separation.)

Results have been very good. He still can be nippy when highly stimulated, but I'm more on him and leash him when circumstances warrant it. He really wanted the redirection it seems; he's a tightly bonded pooch and he welcomed re-establishing a tighter connection with me.

I've been getting a lot of comments on his impressive recall of late. A good reminder to me to that training never ends.

Thanks again for your time and insights.

@tanza Thanks for your thoughts. Aten is a dog's dog, was well socialized as a pup and really plays well with other dogs and very rarely nips. When he does, he of course is just trying to initiate chase.

I've worked with him for the past 2 weeks on recall and attention, and he is back to being the rare basenji that behaves. I still need to pay attention, but if you're not, you don't belong in a dog park, right? (Our park does not have large and small "sides".)

Given Aten's love of dog play, and the insanely close proximity of this dog park to our home it's something we'd rather fix than forego. He's never injured another dog, just scared wimpy ones.

Thanks again for your insights! Stay well!

@dogdad For sure on that ..... the problem with dog parks like this are people that have no idea with their dogs are not socialized and believe that all dogs will get along... NOT... and they do not respond to aggressive to their untrained pups and they will challenge you... same as walking your dog on leash and people walking theirs will rush up with the comment "My dog is friendly"!....and in fact their dog is invading the other dogs space.... especially when on a leash, most like you meet someone and they crowd you too close... reason that I do not go to dog parks...and are careful when walking....too many people have no idea and believe that "all" dogs will not get along. You have done a great job... hope it continues to work out!

You have done a great job... hope it continues to work out!

Thanks for the kind words.

Due to newly minted work from home folks we've had an insane influx of new puppies in the dog park. Thankfully, some of the pros who utilize our dog park, (bless them), have taken it upon themselves to initiate free puppy classes on Saturday mornings to help the humans get up to speed on training and etiquette. It's a start.

Bushbaby Aten Spirit of the Sun as a pup... 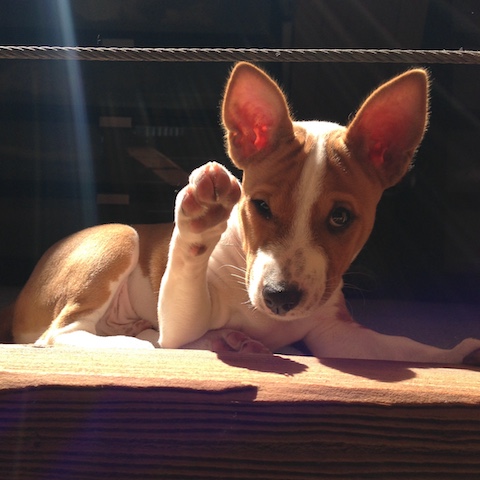 @dogdad - Who did you get your pup from? Many of us are related by our Basenjis?

But what is his registered name so at least I can make sure such a handsome boy is featured in the database ? Terry may have sent me the whole litter already but lets be sure ? Or just his reg# and Mom.

And you can email me a photo to include so the world can see him !

I know Terri very well, in fact got my first boy from her in 1991, she lives about 6 or 7 miles from me. Kennel name is Bushbabies, which is how she registers their names with AKC. I know most all her Basenjis (and one greyhound... LOL)...as I showed many for her.... but do not know Darth Vader? Is that his registered name? You can see the boy that I got from her at my website, link below, go to Tanza Boys and scroll down to Waiting at the Rainbow Bridge

@tanza I was wondering about Darth Vader but actually there have been quite a few over the years. The one that comes to mind first is a Mibre.

We would love to have parents and this pup's name confirmed though !!!

@zande - Right about Darth Vader, but I know that Terri didn't breed to a Mibre dog... so can't be that one.

@tanza You have a look at the database. I hardly think it would be Eurabbie (wrong continent) or yet a Lihu (wrong century !).
But there are others. Beware of asking it to search on 'darth' - its part of too many names.

We can have fun chasing this one, pending data from the pup's owner - Or you could ask Terry ?

I realize I am coming to this chat very late but I want to give you some hope. I have 6 chickens and though my 3 year old Piper will chase down and kill a bunny or squirrel and eat it ....she has demonstrated time after time that she understands the chickens are off limits. Infact I will go further to say that she acts as their protector. If one flies over the daytime fence she lets me know, if one is making any unusual noise she comes to get me. It has become quite comical how motherly she acts to them. 4 of them she was introduced to just a few months ago as I brought home baby chicks.....so they were small enough for her to attack for many months. I just kept telling her they are special and I would even let her sniff them while holding her collar. She knows the difference between prey and protect. I would love to get a few goats but I am not certain if that would work. I am still thinking about that.