Agility training
This topic has been deleted. Only users with topic management privileges can see it.
W
W
willem_42 Basenji Mix Reply Quote

My son has recently taken a keen interest in trying to train our basenji mix to go over jumps. She is 1 years and 6 months and listens to me more than him. We have been working with treats a little but mostly with her favorite toy.

Are there any tips to help keep training fun for her and him?
I am trying to keep his expectations realistic. She will jump but is stubborn like her name sake (Isa)

. If there is a way around she will take that route.

Thank you for your time 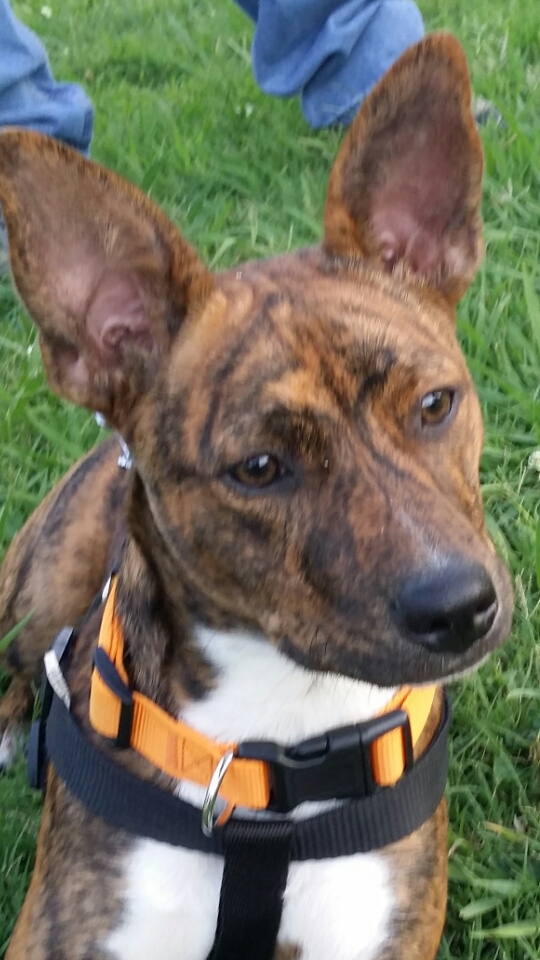 This is what he started with. I moved them outside so he can teach her not to go around the jumps.

Friends taught one of ours (bred by us) with bait on the end of a long pole. There was a low hedge in their garden and the dog would jump over it in pursuit of the bait on a piece of string at the end of the pole. The dog got excited and then jumped just about anything on command.

A few of us with basenji's would go our into a park and had a small battery run motor that would allow us to run a line around the filed as in a baseball design. Then at "home plate" we would have a plastic bag on the line and run it towards "first base". When it was 5 ft out, would release the dog to chase after it.

My Koa liked doing it till he got smart and knew at when the bag got to 1st base , it would take a left towards 2nd. So when he was released, he would cut and turn for 2nd ahead of the plastic. After a few runs, I pulled him from the game.
Stafford-Ames Morse
[removed email address]

You don't say how old your son is, but when my kids were 8-10 they used to run an obstacle course (the kind that only an 8 year old would design) with our first dog Sugar.
At first, they would hold her leash and she'd just run along with them, so, when they jumped, she jumped. It was just a big game.
They weren't training for anything, they were just kids having fun with their dog.
I can see if they had said 'jump' and then stopped afterwards to give a treat, she would eventually do it on her own.

At first, start with the thing being jumped over only 2 inches high, and then make it a little higher

Thank you so much for the suggestions and tips. My son is 10 and he loves doing this with her.
I started him giving a specific command when he wants her to jump. He tells her 'over'.
I have told him that he needs to work with her for 2 weeks on the basics before adding more or raising the jumps. I explained to him Isa's safety and well being comes first.
Those boxes are not what I want them to continue using, so I will be looking to make some collapsible/adjustable jumps for them soon.

I believe someone in another thread suggested this book. I haven't read it though I have bought it. Seems like it might help. The name is perfect: When Pigs Fly! You might want to check it out. https://www.amazon.com/When-Pigs-Fly-Training-Impossible-ebook/dp/B003852KFM/ref=sr_1_1?s=books&ie=UTF8&qid=1528154349&sr=1-1&keywords=when+pigs+fly

Dogs also have different inclinations. Out of the last litter of five, one was definitely "vertically oriented". When the other four hit an obstacle their first thought was to go around it. Her first thought was to go over it! Didn't hurt that our vet said she was the most muscular dog she had ever seen. Probably helped with the jumping. For good or not. Her new owner told us she left her alone for a few minutes and found her on the dining room table.

Thank you so much for the link to this book. Our Isa definitely fits the 'bolter' type. She LOVES to run, chase, and jump after her toys.
My son takes her on a mile bike run twice a day and she still has energy to spare

I think this book will help us with the training woes. Thank you

Do you have a dog training school near you? Many offer foundation agility classes. Many also offer Rally (a fun version of obedience with a twist).
Another good book is "101 Tricks to Teach Your Dog".

That is probably going in my top ten of understatements for 2018.

I had a Rottweiler from a long line of herding titles, all the siblings. His only goat at sheep herding was to mark my leg. Even handler friends tried... nope. Wasn't wasting his energy on stupid sheep.