Muwana wa Bakagi Mulenga
This topic has been deleted. Only users with topic management privileges can see it.
M
M
mvdperez Reply Quote

In English, her name means 'Pretty Girl'. In one of the Congolese dialects (there are hundreds!) 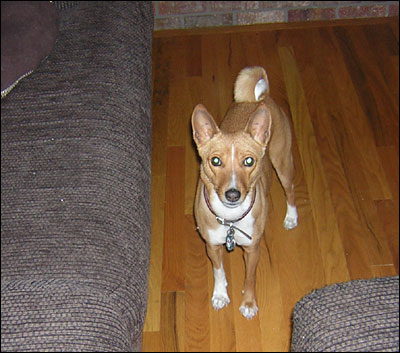 , where these beautiful 'creatures' come from, this is her full name 'Muwana wa Bakagi Mulenga'. We call her 'Bakagi', 'Kagi' or 'the Kag'. Isn't she a beauty? We rescued her when she was just four (4) years old. That was eight (8) years ago. we cannot imagine our lives without her!

Pretty girl with a pretty name. You all are so lucky.

She is very pretty!

PLEASE tell me where you rescued her and if you have ANY papers or knowledge about her - even her birth date would help because I would love to trace her ancestry.

She is beautiful. I love my Basenji. He is naughty at times but at the same time clever, loving, loyal and fun.

**My greatest thanks to all of you for your wonderful, kind replies. We rescued her from CBR - Colorado Basenji Rescue. When she was surrendered, she was surrendered in February of 2006 at half of her body weight (10lbs). She was surrendered with a male who looks nothing like the Basenji as we know from the Congo. Peggy - who founded CBR, told us he was from a different country in Africa. He was 25 lbs. overweight and kept inside the house. Bakagi was left outside to 'fend for herself' - therefore, her canines and most of her teeth are terribly worn from trying to survive on ANY thing outside. She came from a farm outside of Pueblo, Colorado. It was a Divorce situation. Regardless of the deplorable condition of the dogs (the male is now a beautiful, healthy brindle but a bit aggressive), we feel blessed the woman surrendered them. Bakagi and 'Walter', have never tested positive for Fanconi's syndrome. However, there was a tri-coloured male rescued from around the same area who is approximately the same age as my beauty. Peggy believes they may be littermates. Sadly, he just recently developed leukemia. We are praying no interbreeding was taking place as Peggy has told me the male and Bakagi somewhat resemble each other. I am extremely careful with what Bakagi is fed. She has NEVER EVER been fed table scraps and I constantly watch her weight and her diet. We bathe her, I give her supplements, clean her ears and even oil her pads. She was trained prior to her coming to us, and I work with her constantly. I have always wanted to take her coursing as she absolutely loves to run! She even climbed one of our trees when we she 1st came to us and got out of the yard (that was scary!) and teases the 'boys' (the Border Collie and Lab behind us). We have no actual birth date for her, nor any information on the Sire or the Bitch. Prior to Bakagi being spayed, I looked at her little belly and it is a bit loose. It does appear she may have had puppies. I asked, after she was spayed, if they could tell me if she had ever whelped a litter but they told me 'no' (crazy). Here is a photo of her when we she 1st became a part of our family. * *

. Every year we go to a 'Basenji Reunion' where everyone who has rescued a doggie from CBR comes with their beautiful creatures and we all tell 'bad Basenji' stories, do an auction to benefit CBR and share a meal. We also allow are beautiful boys and girls to take part in contests, doing tricks (Bakagi can dance, although I did not force her to do so this year) and they did a costume contest. I am not 'crazy' about my little girl dressing up in a costume as I feel it can be a bit demeaning, but she will wear a western hat, scarf and pose with her 'faux' booties. This year she was a 'Cowsenji' :0) A happy 'Arooo' to all of you!

*Sally - I forgot to mention that WHEN she came to us, her name was 'Pretty Girl'. I had it translated into the Congolese dialect which evolved into what her name is today. I believe in naming my animals after the region of the world

from which their ancestry originated. I am sorry we do not have any further information on this beautiful girl except to tell you that CBR told us she is one of the most beautiful female Basenji they have ever rescued.

I went to the AKC website and searched for Pretty Girl - nope, nothing. She obviously was never registered, at least not under that name unless there was a kennel name ahead of it.

Never mind. You have a lovely girl and can enjoy her for many years, I sincerely hope.

She is truly beautiful! I am so glad that you and your family found her! Much love to her from my new girl, 4 yr old Olly.

My greatest thanks for trying, Sally! That is so kind of you. To njeb, do you have a picture of Olly? Would love to see one :0)