I Know, you are tired of being asked,
This topic has been deleted. Only users with topic management privileges can see it.
T
T
tuttibumps Reply Quote

but I wonder if my dog is part Basenji. I understand that Basenji body color should NOT be white, but she is a mix, whatever she is. I have photos. 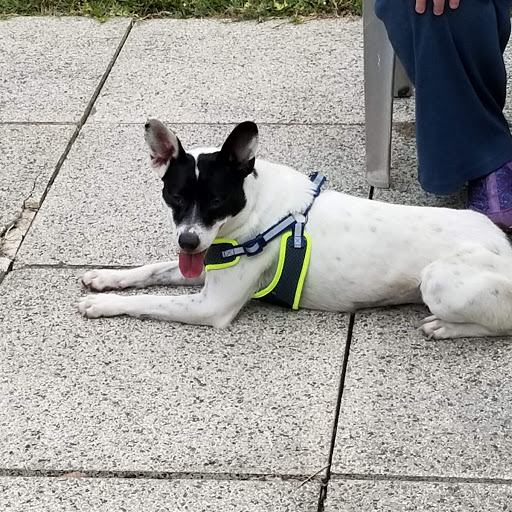 I don't see basenji, but could be a few generations back. Very cute though!

We are never tired of being asked ! But what is so important about the ancestry of an obviously happy, well settled, cute, much loved dog ? If he was part Basenji (and frankly I don't see it) you wouldn't love him any more -

Hi Sally. I"d love to know what mix is in my dog! Sadly, she was found on a beach & no-one came forward for her. She's definitely terrier - prob some kind of fell/border/Jack mix. Definitely no basenji!

Your best bet is to have her DNAed, it's impossible to guess. I got a dog from a California shelter, he looks similar to yours minus the black, but same ears and curly tail. He was listed as Basenji/Chihuahua. I had his DNA tested. Out of the 14 possible contributors in a 3 generation pedigree, they managed to pull out 2 Poms, a Maltese, and a GSP... no Basenji, no Chihuahua. That leaves 10 contributors unaccounted for, he's a quintessential street mix. I'm sure yours is the same, except from the beach!
-Joanne

@vivsos said in I Know, you are tired of being asked,:

We found a puppy on a beach in Ireland when we were sailing / camping there. My son (then aged about 5) walked for miles carrying the puppy in his arms and telling me 'dogs need exercise'.

When we came to leave, the camp superintendent told us the site was closing next day and the pup had been abandoned weeks earlier, very tiny. So we dropped him back into the car and drove home with him. Like Topsy, he grew and he grew ! Definitely greyhound in there somewhere. A lurcher and a fabulous family friend who brought Paul up !!

He was my first dog since I was tiny myself - so I know beach-found doggies are very special.

Have a DNA test done and then you'll know more about him.