Liyah's First Shows
This topic has been deleted. Only users with topic management privileges can see it.

Liyah's first shows were over the weekend in Bel Alton, MD and were quite an adventure for all involved! It was really fun to go to a show and see so many basenjis!

The first day was the Potomac Hound Specialty. I showed Aaliyah for my/her first time in the Puppy Sweepstakes. She was one of 3 girls in her class and she went Best OS Sweepstakes - thankfully the judge was really nice and could see thru her handler's lack of skill

and her major puppy antics.

The rest of the weekend was not quite as successful but fun none the less.

The same day as the Sweepstakes, she went back in for Bred by Exhibitor handled by her breeder - she was 3 of 4. She actually managed to trot the last time around (the first time around she was a bucking bronco :eek:). She did ok on the table and free stacking - better than she did for me.

Friday - Sunday were all breed shows. She was 3rd of 3 in BBE Bitches both Friday and Sunday (she wasn't entered on Saturday).

D. She is the cutest thing but she thinks the show ring and all that goes on before, during and after is a major party thrown just for her - wants to meet every dog, person, play with hats, etc. :rolleyes: Two of the judges commented on it :o. Hey, I figure at least she seems to love the whole experience so that is a plus.

I have no pics as I only had my cell phone. Her pic was taken for her Sweepstakes placement. I'll post that when I get it.

Two other things that were pretty cool about the weekend:
The Potomac Hound Specialty started off with a Casting of Hounds. Basically a fox hunting demo (without a fox) - complete with a pack of Foxhounds and 2 riders on horseback. Really neat demonstration if you've never seen one before.

Also, one of the all-breed days, there was a rare sighting. This girl was ringside - anyone want to guess what breed she is? Really sweet girl.

It's a single breed? Not a mix like Chinese Crested/Basenji?

Sounds like your pup had fun - and that's the important thing. Am looking forward to her pics.

Xolo? (okay, that's the shortened version of the name; the real name is about 52 letters long)

Congratulations, sounds like Liyah enjoyed every minute.
We went to our first Dog show as spectators on Saturday, it was fantastic to see so many Basenjis.
As for the xolo Dog, i wasn't even sure it was a Dog at first, have never seen anything like it before. 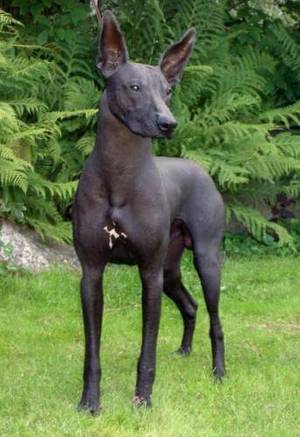 hehehe you need more practice , but keep it the fun way, your basenji does anyway

I think the dog is a youngster xolo. It might be a peruvian but I am not used to those having so much hair on their heads.although they can have.

Oh my!! I could never own one of those….I'd always want to dye that mohawk and gel it into spikes:D

Congratulations on your first show. Sounds like Liyah and you had a good time:)

Everyone that guessed Xolo is correct. She is 1.5 years old. What a sweetie. Evidently they can have real dodgy temperaments, but this one was really nice. Her 2 littermate brothers have hair. She is the standard size, but they come in 2 other sizes - intermediate (similar in size to a basenji) and miniature. The hairless versions don't always have all their teeth…the one in the picture didn't have canines and some of her molars. Strange to see a dog without canines.

Thanks for all the kind words about Liyah's first show...I definitely don't do her justice so I'm sure I need more work than she does. :D:D I was laughing with some friends that between the 2 of us, I'll still be showing her in 2012. :D:eek:

Congrats on the sweeps placement

And I feel your pain in the other placements

Congrats on your first shows! I would say if Liyah is overly happy and playful in the ring, then that is a good problem to have. Can't wait to see the picture.

Great job to you and Liyah! Don't worry, you'll have it figured out in no time.

I know…doesn't seem healthy and very strange to see a dog missing so many teeth. We were talking with her owner and a professional handler from Mexico...between the 2 of them, they could answer everything we could think of to ask. We asked about the teeth and they were telling us that they were herbivors back in Aztec times. The professional handler was saying that they don't have the same problem with the fatal gene that hairless Chinese Cresteds do...they don't have to breed to bring hair back in.

Congrats on the sweeps placement

And I feel your pain in the other placements

Peruvians also lack teeth a lot of times.
Also some basenjis do lack p1 for example as a lot of other breeds, did you know that they found ancient skulls of dogs in egypt that lacked teeth as well? It seemed to be the case in these ancient breeds for thousends of years and it doesnt hurt a dog when he or she misses 1 or 2 teeth, ofcourse I agree that full dentition would we the best, but people should not penalize a dog for missing 1 or 2 teeth , especially not when it considers p1, because those teeth never has been of any use anyway and they. But that is my humble opinion

I dont mind using a dog in my breeding with missing teeth ( 3 max. though ) when the dog is perfect otherwise, and when the female has her complete dentition and preferable her parents and the dogs parents as well.

The professional handler was saying that they don't have the same problem with the fatal gene that hairless Chinese Cresteds do…they don't have to breed to bring hair back in.

they dont have to breed with the powder puffs in the chinese cresteds as well, the story about the fatal gene in hairless dogs, regardless what breed ( xolo peruvian, chinese crested ) is nonsens.

We asked about the teeth and they were telling us that they were herbivors back in Aztec times.

how funny, never heard of that, makes me wonder why they should not need teeth for eating veggies? they need to chew them too right?

how funny, never heard of that, makes me wonder why they should not need teeth for eating veggies? they need to chew them too right?

yeah…that is a load

that would mean that cows, horses, gorillas? wouldn't need teeth...

I don't know, because I haven't run across more than one Basenji that was missing an incisor.