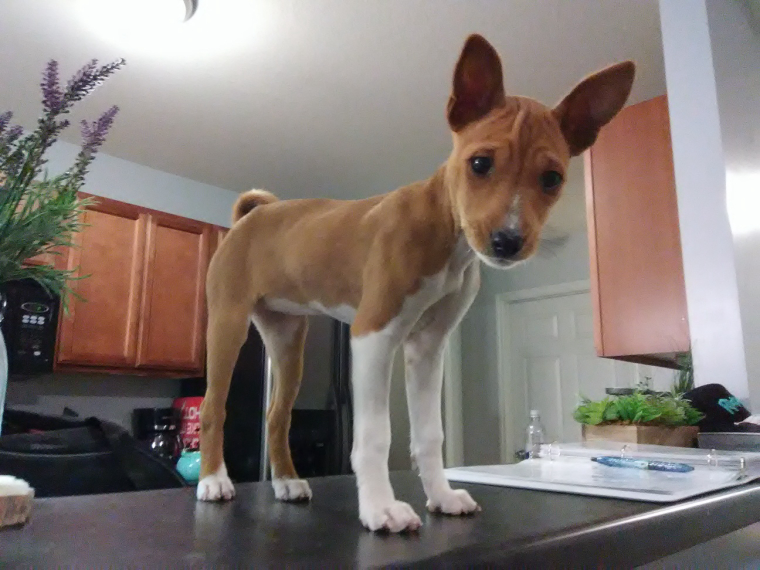 Meet Lilah. She is a handful. She is doing okay but def trying to challenge me. She is so adorable though right?....

@nick4 I am in the "Basenji Zone" as well. I have done the putting her in the crate and then walking away while I talk to her and then letting her out and then back in again and I do the same thing where i will step out then come back in again. She does best when i leave her a good greenie for her teeth and I step out really quick she got used to it. Also I had the shower problem I even went as far as bringing her into the shower and to my surprise she did not care and i used it as a way to get her comfortable with the water....then i slowly gave her water from the shower talked to her while I was in there and peeked out the curtain every now and then and she got a lot calmer. I dont know if any this would help. Just wanted to share!

i will tell you my experience. I have a 13 week female. I spent 3 weeks prepping to take her into my home. I did all the things you are supposed to do with the crate and treats ect.....well she peed and pooed in her own crate space and walked all over it....then she stopped the pooing and still does the peeing every time I leave no matter how long. Sometimes she even peed in her own bed. I have never seen behavior like this from a dog. I finally got around to closing the crate up after she was used to it and making it her home. Bad idea....she climbed the crate broke her name yelped for so long and I even practiced coming and going to try and show her that "id be back" and to calm her and this did not help. I did give her a reward for going into the crate and after she was calm in the crate and this seemed to work a little...just a little. I have found that i give her something really good to chew on she is distracted enough when i step out that she will forget to yelp for a minute but i do hear her after i m closing the garage door. Also I have found that If I sneak into the house she is really calm in her crate and has not peed but if she hears me open the garage door she will yelp on purpose and pee. I have spent the past 3 weeks cleaning her pee. She does go once I take her out of the crate and I have been consistent with a training pad even though i dont want to use this i have to keep her indoors due to PARVO in North Carolina till she is a bit older and has her immune system up a bit more. I have just been consistent with ignoring the yelping i think she will eventually understand that crying will not make me return to her and cave to her loud demanding yelps. I am still waiting for the yelping to stop. She has stopped peeing as much when I leave a pad in her closed off area. Since they get board and are prone to chewing and digging she has tore up the first 8 pads i tried doing this with. I IGNORED IT ALL and kept laying it down in the same spot for her. She is very very slowly catching on I can at least walk her to a fresh pad immediately upon opening the door i grab her and walk her to the pad and say "go potty" each time and she does and when she is doing it i praise her so much lots of love and i give her just a few kisses and let her run loose for a few minutes till i bring her back to me to try and control her environment. Also here is one other thing that is working I bought her a small bed. put one of my old shirts in it along with lots of different texture chew toys I added a towel for the pee.....but she is getting used to the bed being "her spot" and she is more comforted by this bed then the crate and I am training her to sleep in it as well hoping to move it down to the crate with hopefully little to no separation anxiety. Does anyone else have any good tricks that worked. She also didn't like the KONG at all. If I leave her a bunch of Cardboard she will chew it all up and that seems to satisfy her need to be destructive on that and not anything in the house......i have to keep close watch on her though and constantly give her guidance back to the chewable stuff. -Ali