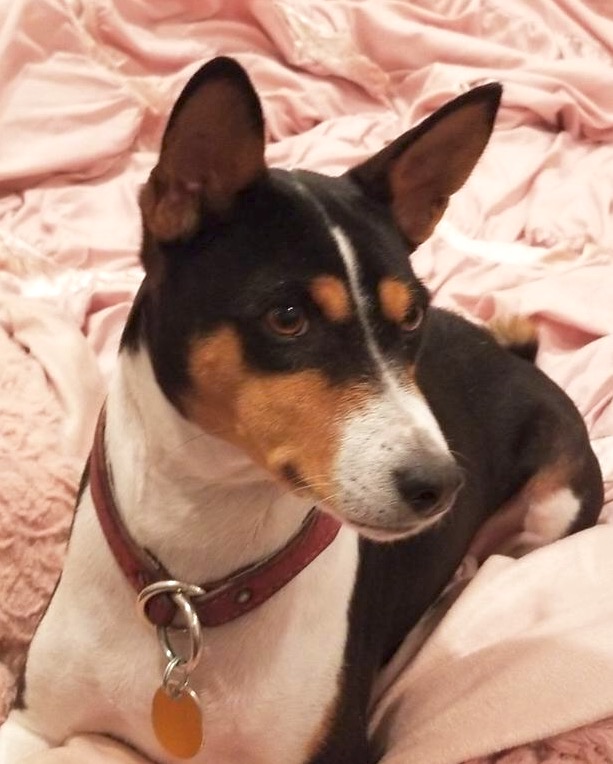 She's turning 10 in January! The most intuitive and actually silent (we rarely hear even a gurgle) basenji I've ever had! What a pal she is (;

So we adopted our girl at 9yrs old, have had her since April. She is the 5th basenji I've owned so I know the breed and their quirks very well, the only problem is since she had 9yrs of being acclimated to not having other dogs around, now that we have her in a city where she takes at least 2-3 walks a day I am having a hard time breaking the habits she's built for years under different circumstances.
Whenever we're able to have a controlled meet&greet with a friend's dog after a few minutes of commands and sniffing she shakes off the aggression and tries to play (once she's crossed the barrier of 'scary enemy' to 'friend' it does stick!)
But it has been very slow progress still getting her to calm down when seeing unknown dogs while out on walks. She will totally spaz out, hair raised, panting, pulling any way she can to keep her eyes and body pointed at the other dogs.
We try to distract by saying "let's go!" in a different direction and then praise when she looks forward and stops worrying - it's been making her reactions much shorter and slightly less of a spectacle, but it's been slow results,
any tips?

(I know typically the obvious solution would be to socialize the dog from the very beginning, but I unfortunately didn't have the chance, adopting her at 9yrs old, she is the most wonderful and calm and sweet other than this!)

(PS. She even gets along with our reptiles and lets the lizard climb on her with never any fuss or aversion, which is normally unusual, but shows how calm she is generally, can't seem to stick it with the doggos though. Also, she has never been attacked or severely injured from the records I have so that shouldn't be it)

Our 9 yr old girl Zhandi does really great on her dog food, and has been consistent in this, but seems to get loose stools, gurgling tummy, but NO vomiting whenever we try to give any kind of treat that is anything other than her dog food.
I'm assuming it may be because she's so used to what's been good for her so far that now anything new is causing an upset tummy! At this point we've gone through several nice brands all to the same effect of getting poops, but always passing fairly quickly within a day or two at most (definitely the treats, nothing else, as she isn't allowed to eat any human scraps).

I'm wondering what would be good to give her as treats other than store-bought ones, such as fresh carrots or other fruits and veggies (although she won't eat them raw) and how to best prepare (such as steaming, raw, sliced thin, boiling)?

I figure if her stomach is sensitive to store-bought treats, then fresh snacks should only do her good! What are some of everyone's B's favs?

I want to find something her stomach can handle, I feel bad she hasn't been able to enjoy a consequence-free treat in a while!