@yaleezaforeva - thanks I didn't know about that. We won't be around this weekend, but maybe next time.

My last Basenji's name was BENJI -- we use to love saying "Benji the Basenji" it was always so funny. We put him down around 4 years ago, now we have RUFFLES. lol

I have a 4 year old and live near Mavis and Derry which is almost border to Brampton. 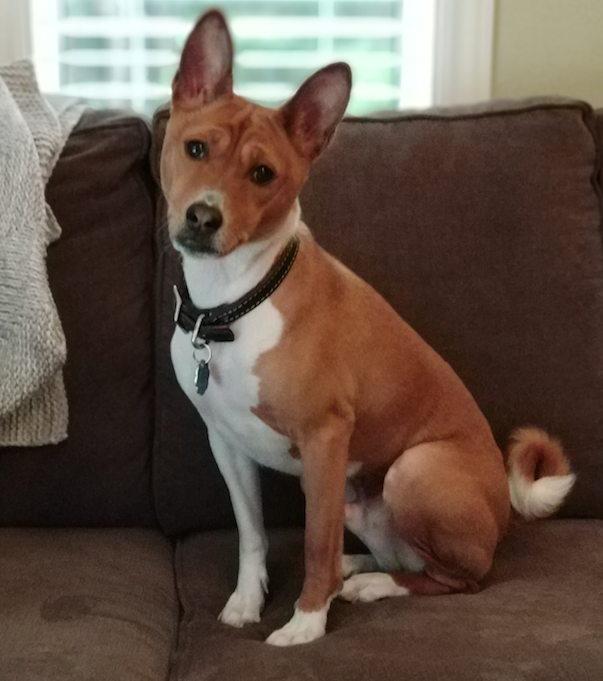 We are on our 2nd Basenji, he'll be 3 in February. We got him when he was 5 months old. He was bitey and chewed everything not his own.

Try to discourage this behavior immediately because if it gets out of hand it will continue for a long time and eventually he will seek other family members to play bite with that he knows he can get away with (smaller children, etc ).

Get him a lot of toys, make sure to correct his behavior at every opportunity. Do not ever rough house play with the dog using your hands. Get a basket and keep his toys in the basket so his toys are in his pile, not scattered around the house. He will chew the basket too, get another one. Keep his toys together.

I disagree with using crate if that's where his bed is when you are not home and leave him in.

If he bites you, you can hold him by sides of neck scruff and tell him sternly "NO"! An alternative is to lay him on ground and hold him down and say "NO"! You'd be surprised but at 4-5 months he can already be trying to be alpha male over you, so one exercise you can also consider for this is to hold him in front of you and keep a long stare until he looks away, your family members must be the alpha and your dog needs to start learning the pecking order. Some may not agree with any of this, but I'm not here to judge. Basenji's can he difficult breed, some can turn out very very stubborn and this is a very determined breed. Also ask your breeder for recommendations.

The suggestion of socializing with other dogs is good idea so he learns more how to behave around others.

Good luck, it will get better over time.

Both my basenjis did this regularly.

The basenji I have now is 2.5 years old but did it since we had him at 5 months old.

Usually he eats grass first, then throws up. Sometimes he just throws up without the grass eating.

So sorry for your loss Perry, as you know I just lost mine this week and just the thought makes me sob. I hope you are hanging in there. Definitely rescue another one if the chance comes up. I'm hoping to do the same.

So sad to have lost my Benji yesterday, he was a great family pet and integrated really well in our home along with our oldest teenage daughter, 4 year old and new born. Never any trouble at all, he was the greatest dog and I will miss him forever.

The way in which he went was the strangest and something that I'm having such a hard time forgetting and is so upsetting. Note some of this is graphic.

4am Thursday morning he went to the back door to go outside, when he came back a few minutes later he was laying on the step to get in and couldn't get up them. His hind legs were dragging behind him and he was yelping a lot. I pulled him in and he started to just drag himself across the floor fast and couldn't settle down. I brought him on his spot on the couch and tried to comfort and calm him down, and he bit my hand. He's never bit me before at all, or like this anyway. I tried using his collar to control his neck but it was difficult he would snap back quite easily so I'd have to let go of it.

I brought I'm back on the floor to see what he would do and noticed some stool showing but not coming out. I massaged around the area until it all came out. He had no control over it and unable to move back legs at all still. I let him go again and he took off into another room under the dining room table. Always yelping in pain he would move around for a bit, stop, and then carry on again. I brought his bed to him and he just started biting and attacking it. I took a baby gate to try and herd him a little bit and he started to bite the gate, and soon there was a lot of blood and I moments later his canine tooth was laying on the carpet next to him. He was biting so hard his one tooth came out completely.

My wife was on the phone with pet emergency and they suggested to wrap him with big comforter or blanket so he couldn't bite anymore and then bring him in. We got a blanket and I managed to drag him to the front door so we would be ready to leave. We have two small kids at home so had to wait for my sister to arrive so we could leave, there was no way I could drive him to emergency myself. While waiting he had bit me again, this time my arm and it was a really bad one. It's also then I noticed his other canine was completely twisted sideways and pierced through the side of his lip. I broke down I asked him what happened and why he had to do this. I was so mortified and sad by what he was doing to himself and I couldn't really stop him, or it was too late.

Pinning him down in the van the whole way while my wife drove was difficult, as he wanted to move free. The yelping crying was terrible and lasted the whole time. We got to the vet and the vet said it could have been a herniated disc, and didn't seem to have blood in his back legs and that maybe a blood clot formed somewhere that stopped flow. There wouldn't be more answers without more testing but given his age and medical history, I decided that it would be best to put him to sleep. This was not what I wanted to do but felt I had to.

A few weeks earlier we were told through some X-ray's that he had tumours or cancer in one of his lungs, and possibly he had a ulcer because he seemed to have been digesting blood. We took him in because he had developed a cough and short breathing. His white blood cell count was very high, and his platelets were really low. He went on antibiotics and some other medications for his stomach ulcer and after a week practically seemed back to his normal self. That is why all what happened most recently is so surprising and shocking. Maybe it was all related somehow, but still, I love this dog, I will miss him and wish the ending could have been so different. I never imagined an ending like this.

I miss you forever Benji.

learn to run?????
i walk our two basenjis at once. want to talk about pulling. lol
some days are better than others. depends on how many SQUIRRELS are out. and if other people are walking their dogs.

usually they are pretty good… until a leaf, walmart sack, bird, cat, squrrel runs in front of us. my sister asked if i ever had any fun walking them. i think they are GREAT fun.

i get a GREAT work out.

My Basenji Benji walks me every day, he usually pulls and is very eager to get to the park we go to, then for the walk home he's calmed down and more reserve.

In my mind I've convinced myself that when we first leave the house we are going "hunting", but after a failed attempt we stroll home casually and modestly.

I'm just writing to update that since the switch back, Benji is doing well again. Bile only once so far, and no mud-pies at all either. Now we're learning to deal with the snow, but that's a whole other story.

I'm still researching what new food to transition Benji over too, also he is only eating all his food late at night, none in the morning or during the day. Because of that pattern, I leave it out all day. If I really want him to eat twice a day, perhaps I should remove it at night all together to see if the next morning he manages to eat?