@giza1 Thank you so much for your reply do you have any experience with the medicine Vetoquinol for male dogs? I am not sure how this would work. Unfortunately because my dad is in Costa Rica many of the medicines are not available and I will need to send it to him so I wanna make sure I send them the right thing or at least make the best educated decision when sending the medicine. Thank you!

@zande Thank you so much for your reply, apparently it makes things a little bit more difficult because my dad is in Costa Rica the medicine the veterinary prescribed is not available in the country. so before sending it to him we would like if you have any feedback on the medications the vet is prescribing or Input,?would be of great assistance! So I was able to find out from my dad the medicine the vet is prescribing is Fenilpropanolamina (Spanish name)which is a syrup equal to Vetoquinol for dogs or 40mg of Urilin or Uristop for humans. Thank you again for your help and Neo will be so much more comfortable to, he will send his thanks tooo!

Hi! I really hope you guys can help me with this my family has always had been a basenji family and currently my dads basenji has been dripping urine from his penis..... this is what happened according to Dad:
About a year and a half ago my 10 yr. old male Basenji, Neo, was having trouble urinating.

I took him to the vet and the Vet used a catheter to unblock his urethra. The urine that came out contained many small crystals. I took him home and the next day the problem started again and he was unable to urinate.
The Vet unblocked him again and I took him home. He was ok for a couple of days, but the problem started again. The Vet checked him and said that unless he operated the obstruction would persist.

After the operation he had a small hole in front of his testicles.
So, he had the normal aperture at the end of his penis, and another 2 or 3 inches toward his testicles that was constantly dripping urine. The doctor said the hole would heal up, but after a year it had not. I asked the doctor if he could close it and he performed a simple operation to do it.
I thought that the procedure would solve the problem. It only made it worse.

He is now constantly dripping urine 24 hrs. a day from his normal penis aperture. The doctor said that there are pills that I can give him for incontinence. Does anyone have experience with this?I am looking for a solution to this problem. And really want to do the right thing so Neo isn’t suffering anymore. Please help! And thank you in advance!

@basenjimom2 Oh we would love to see it! I took a screen shot while the picture was horizontal holding my phone vertical so it would be smaller but visable then cropped it. That worked for me....good luck! 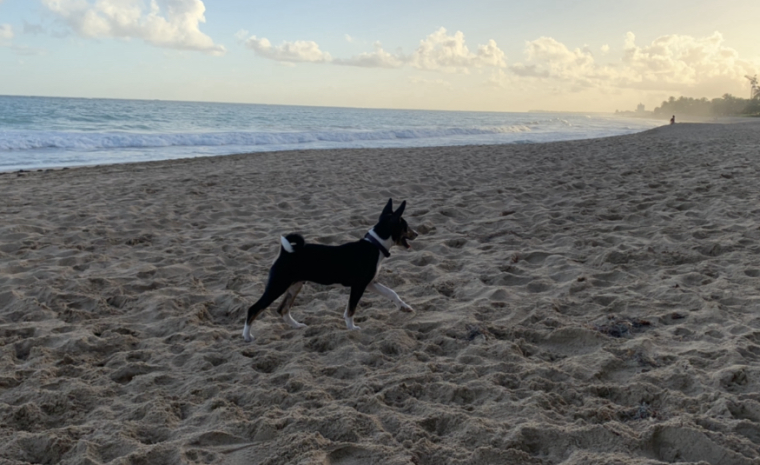 This is almost the closest I have ever gotten to the shore, back when I was a puppy (5 months ago) and mom would let me run free on the beach. The only other time was when she held me and tried taking me in with her! If you see the pictures of the waves that day oh boy! My mom is just like me though, very persistent so I probably will end up going in the water at some point!

@zande thank you so much! I just sent you a e-mail with the info I have!

@daureen Thank you! I was reading in one of your posts that you were getting neutered and had to wear a cone, I have a cone on right now because we were attacked by another dog when we were going for a walk on the sidewalk! I have had it on since the 28th and still have another 10 days! It is very important they don't lick the wound, even if you think it is good for them because their lick is like a scrape lick and it opens up the wound. So I take it off when he is calm and I am able to watch him but if he starts to get too wild I put the collar back on, it has become almost a training method, he knows if there is no biting or licking then no collar. Good luck!

@tanza said in Sky Hunter is Happy to Meet You!:

Thank you so very much, I am reviewing the information as I previously had a dear Basenji named Floyd 1997-2003 that we suffered with for 2 years and I was very careful or what I thought upon purchasing Sky Hunter. I saw this information which says PRA-N @ http://www.pedigrees.zandebasenjis.com/ however when I looked up on the site of OFA just now, which you are referencing, I see the Sire seems to have been tested in 2017 as a carrier .... I will order the test right away as I will pray this is a non-issue. I did not see anything about the minimum age as his 1st birthday is coming up and Sky Hunter wants to have lots of healthy fun! As for the mom she is registered in Federacion Canina Dominicana, so I cant search except I do have a DNA study that seems to be clean. I will be sure to do the test...Thank you for reaching out and I will keep you all posted.

@tanza he was a star fallen from heaven truly came to me on Thanksgiving Day. His sire is Skywalker N Miebre’s Dark Night and His Mom is from the Dominican Republic Aguilo Kennel I believe. I would love to know if any of us are related

@kembe thank you! Can I see a picture of you?