I definitely agree with the post about big family walks and keeping a safety space - call it Leroy's room even - like a crate with an open end or a dog bed behind the coach, under an end table whatever might work best for him and your house set up. When Leroy's in his "room", instruct your boy that he must be left alone. This gives Leroy a safe space and then he can better control when he wants to interact and when he doesn't.

I also might add that sharing in a skill you start teaching at your son's age. Much like you start teaching them to ask to play with a toy that another kid is playing with, you can get him vocalizing and asking to say hi to Leroy. You could start doing this as well. As you approach Leroy, you could say, "Hi Leroy can I pet you? Or can I say hi?" Etc. Then decide what is the behavior Leroy does that signals he says yes. Maybe it's when he stands up or only if he approaches you.
And teach your son to start doing the same. Leroy probably sleeps harder than he used to and his startle response is getting mixed up with your son's presence. If you can get your son to give Leroy more time - from the asking the question and waiting for a specific response - that may help prevent the lashing out that Leroy is doing even when your son isn't interacting with him.

Yes Cushing's is a life limiting disease. Our Harley lived about 2 years once diagnosed as well. If it's adrenal gland based, there may be surgical options but not sure - you'd need to talk to your very and decide what's worth it. I don't know what complications there are if it's in both adrenal glands. For pituitary, there's no good surgical options. The pituitary gland is literally in the center of the brain.

One thing that you could look into to help combat metastasis is some of the natural supplements out there that are anti-cancer. There's some for dogs now with turmeric (plus peperine) aka curcumin and reishi mushrooms. As with all supplements, read the ingredients and run it by your vet if you have questions. I'd be willing to bet some folks on here might even have recommendations.

In the meantime, love on your fur baby and enjoy your time with him. You sound like you are a devoted pet owner and he's lucky to be with you!

Our family dog growing up - bluetick dalmatian mix Harley - had Cushings. We got his medication filled at a people pharmacy - lived in Michigan USA at the time. We used a little independent pharmacy because that is what was in the tiny town we lived in but I know we specifically got it there because it was cheaper. Now with goodrx you might want to check it at all the big and little pharmacies. People can get Cushing's too so it is probably cheaper through a human pharmacy.

Also, be prepared for your guy to start having accidents in the house. There's a lot in common between the symptoms of diabetes and Cushing's but they don't have the glucose spillage into their urine. Increased thirst, increased urination that they just can't control. If I had a dog with Cushing's now, I'd work to teach them how to use puppy pads in the house to stay ahead of accidents. My folks just put Harley in the garage all day. Oh the things I wish I could have known when I was a teenager!

Cushing's either comes from a tumor on the pituitary or a tumor on the adrenal glands. The one upside to the pituitary tumor type is that they also get an increase in a hormone - can't remember the name - but it modulates pain. So while Harley had hip arthritis he actually felt better once he had Cushing's. Until the very end because his tumor spread, he was never in pain from it and actually had some increases in his mobility.

Prayers for your b! He'll probably still have a couple (if not more) years of pain free happy life as long as you can manage his urination for your own and your house's sake.

Thank you everybody so much! I appreciate all the info. I had some vanilla Breyer's all natural and gave my guy a taste of that... boy does he seem to think that's a great treat! Obviously, though I don't want that to be the only thing I do. I'm going to follow up with our vet on getting a draw for the full thyroid panel at hemopet once next pay check comes through. You were right he was only checked for T4. Thank again basenji forums!

I was looking back at pics from when he was younger and weighed more. I think he's always been a bit taller than standard and had a little barrel chest. Used to call him a basenji bouncer at the dog park. He was all about playing with the labs, pits and other big dogs - probably because he knew he could outrun them if they ever got too rough. He's much more about slow walks with me and lap snuggles these days

Yeah that's what I'm a bit worried about. If he gets sick, he's got no fat to spare. I didn't know thyroid was a separate blood check so we may not have done that. I will call my vet to check. Thanks for the tip! Any thoughts on helping him to gain a bit in the meantime?

I got my B a raincoat, cut the hood off and he's totally fine in the rain with it. It's funny though that he'll still avoid puddles even through he's standing on wet ground anyway!

Also he's currently eating a mix between Purina Pro Bright minds and Taste of the Wild Wetland recipe dry kibble a heaping 1/2 cup am and pm. I've tried giving him more but he'll walk away from the bowl. I also give him something supplemental with his dinner like an egg, or scoop of plain greek yogurt or non seasoned meat from whatever I cook etc. He gets his special at dinner because that's also when Brady the beagle gets something extra - but his is to hide his medicine. 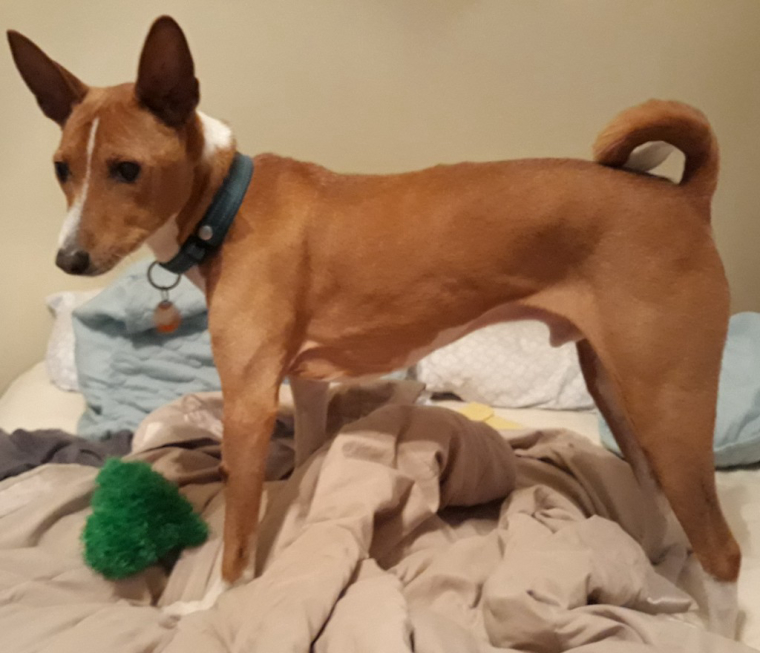 My senior B - Beegin is 13 1/2 and is now weighing in at barely 25 lbs. I have discussed it with my vet as Beegin has been slowly getting littler for years now. There's no underlying GI or metabolic disease and my vet thinks he just doesn't have the muscle mass he had in his young years and isn't concerned. Beegin used to be around 31 or so lbs. My vet said he seems like a slim active senior dog and isn't worried since here eats just fine. I'm just wanting to stay ahead of any issues so I thought I would get input here. Beegin is my first basenji.

Now, I will admit it could totally be my perspective too. My other dog is a food hound beagle that I have to monitor, get weight mgmt food and supplement with low calorie veggies to try to keep him from becoming a sausage.

I'll put pictures here as well. I just have to figure out how to shrink them. 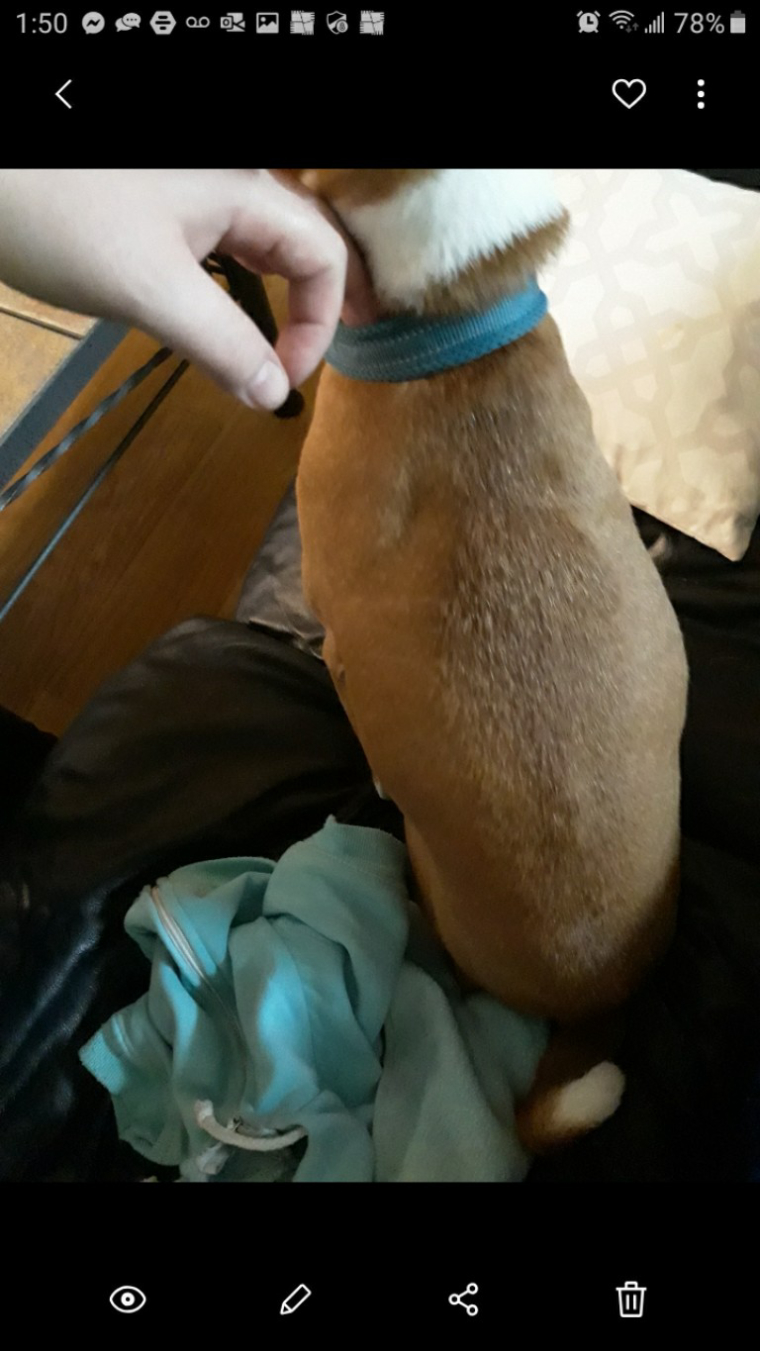