@senjisilly Thanks for the info! Yeah, I received no history on him other than he’s 13 weeks and a lab mix.

@giza1 that’s fair. I never heard of a basenji until the vet mentioned he looked a little bit like one. I just wanted to see if people who knew the breed better had any ideas especially since some DNA tests have been unreliable on past dogs I’ve owned. Thank you for the tip though, you’re definitely right!!

@senjisilly got him in Colorado, don’t know if he was from somewhere else before

Hi all! I just recently got a puppy from some people who had to give it up because their living situation wouldn’t let them keep it. They told us he’s a lab mix but didn’t know the other part. The thing that makes me think possible basenji mix is he has a curved tail with a very short coat (not an ounce of fluff on him so I don’t think he’s one of the fluffier curvy rail breeds because every one I’ve had at least has some extra tail fur). He’s also quite small and extremely high spirited, loving, intelligent to the point of independent thinking sometimes, and quite the mischevious lil pup. His paws aren’t too big which makes me think he won’t get much bigger too. He’s also got the very lean and regal body lines of a basenji. I’m just asking so I know exactly what I’m getting into since I know basenjis have special requirements and I want to make sure I meet this puppies needs instead of just training it and providing it with the usual lab mix resources. Let me know if the pictures uploaded right! Thank you all for the help!! 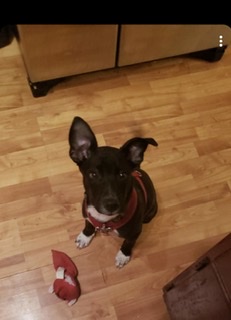