Your dog does the same toothy smile mine does. He pulls back his lips and smiles when he is happy. You see all his teeth. One big toothy grin.

My family got this dog at a local Mass. shelter. He was about three months at the time. We were told a family surrendered him and he came from Penn.. He was labeled as a parson/jack Russell Terrier mix. The first months with him were insane. I wonder if that is why they gave him up! I would not do it again. My second dog was a piece of cake as a puppy. Rafael has calmed down a bit with age, now 8. He does have some quirks, like he makes funny noises and barks funny compared to our other dog and dogs in the neighborhood. He turns around when outside is raining or wet, it's the only time he uses the dog house- to get out of the rain. Our other dog could care less. He likes to climb stuff. He sits on top of the dog house. He almost always goes after other dogs when he sees them on walks. Those dogs can be completely silent and Rafael is trying to take off. My daughter thinks he isn't trained but he does follow commands at home. I know most dogs like to hunt. I always ask him what he is tracking on our walks, and of course he sees or hears things in the dark, from across a very large 2 way street with a park (in between the ways) and he starts running toward whatever with me behind him hanging onto the leash. We have had a lot of rabbit sightings in the neighborhood these past few years. I have no clue what he sees or hears until it's in front of me if it hasn't fled. My brother said he looked like a Bisengi mix the first time he saw him. Some behavior is dog behavior but when I look at photos I think he looks Bisengi. 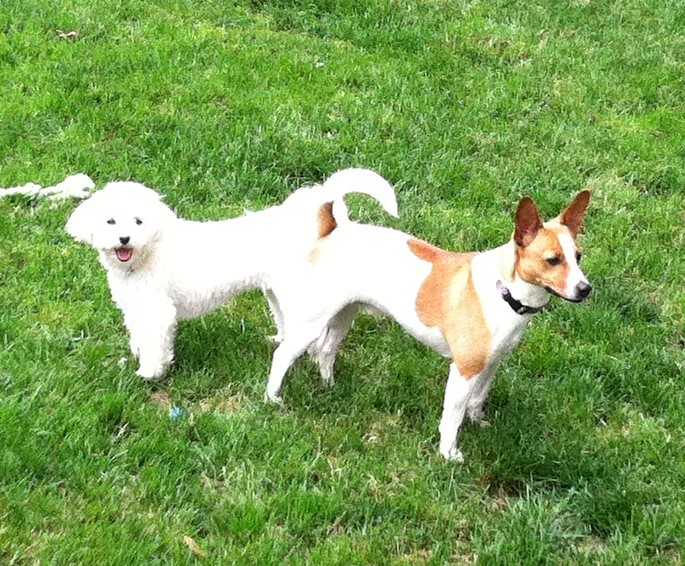