We also have a possible Basenji/Terrier (Yorkie) mix. I've had some doubts, but seeing this picture of Rosie, I can't help but see my Rebel. Such a great looking dog, and if she's anything like our girl, you're in for a treat!

@dagodingo She definitely hates the rain. We have to hold an umbrella over just her, or else she won't go. She is stand offish to any shadowy figure, fallen tree branch, statues of Lincoln...you name it. If she can't recognize it immediately as friend, she'll come to attention, dig her heels in, and if she feels good about it, begin to assert herself.

Hello, This is Rebel, our beloved Basenji Mix. We adopted her through a rescue group who found her and her brother (who was tan and white). We were only able to get her, but we were told she was Basenji/Yorkie. Knowing nothing about Basenji's when we rescued her - I cannot find another dog that looks like her and have been skeptical that she is a Basenji - but from what I've researched, her personality seems to fit pretty spot-on with the major descriptors.

Rebel is big on self-grooming and doesn't bark (well, will occasionally if she senses a threat, but it's usually one "woof" and that's it). Rebel doesn't something between a yodel and a howl that we call a "coo" - it has a very specific vibrato and we've never heard a dog do it before. When she was a puppy, her ears were almost always straight up, they have since fallen with the occasional perk. She was black, white, and tan, which has muddled into a grey coat as she ages - she is 1 year. She definitely hast the hair style of a yorkie. She does not shed very much at all. She is wicked fast and super friendly.

We love her very much, no matter how often she decides to forget our training. She is great with company, kids, other dogs - she is very submissive. She will play for as long as she has the energy, which seems to be endless some days. Rebel, when home with just me and my partner, is generally calm, doesn't like to be left alone but does well in her crate, and is very, very curious about everything. Definitely a chewer, but thankfully it is with her toys now and not our stuff.

I have two pictures to post, the second one I posted with other dogs for scale and full body! She is 20lbs. Enjoy! 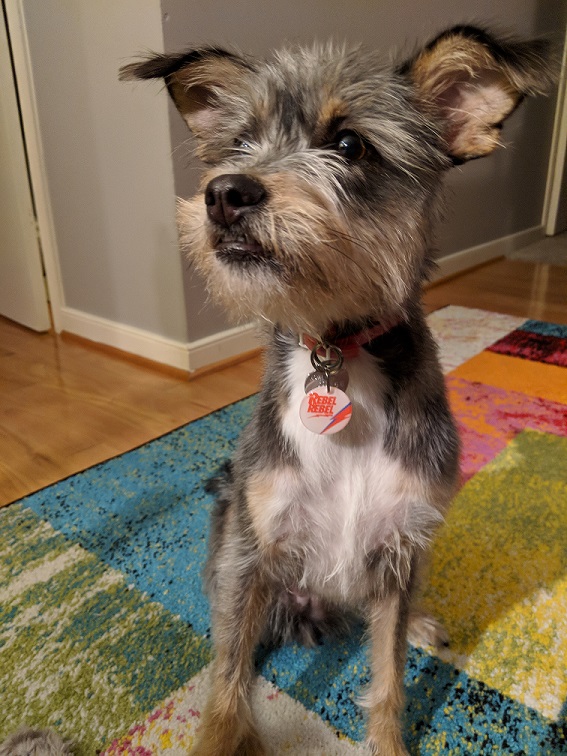 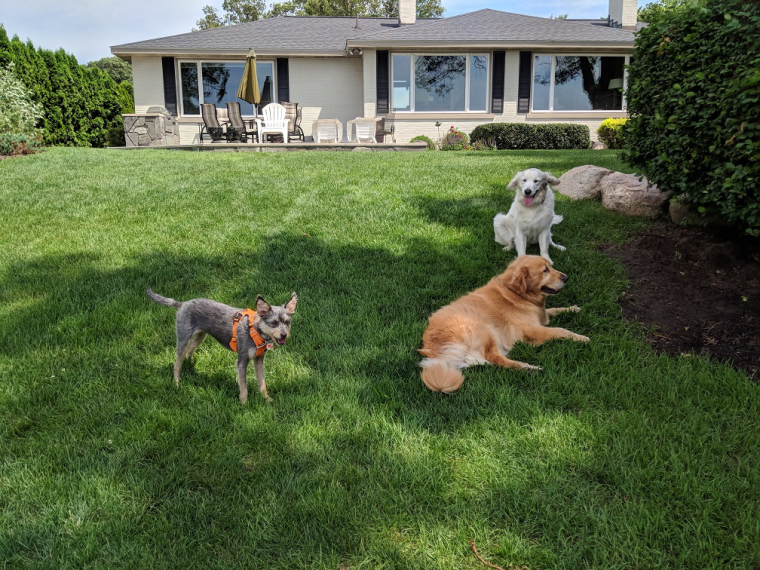