@rugosab said in Not sure if Basenji or mutt...:

I can just see him doing the 'basenji 500!' Hopefully you are already witnessing him all of a sudden getting a burst of energy and running around crazy - the basenji 500!
Enjoy him!

Oh, yes! We have already seen this! The thing is, I have seen this in all the dogs I've owned (particularly the Weimaraner, Pit Bulls, and Jack Russell's) throughout my life.

@DonC Yeah, If I can do anything about it, I will. Maybe like another user said, I'll get overlooked during the whole virus shutdown, and they won't try to enforce my adoption agreement. If anything, I'll ask them if we can wait until he is fully matured to avoid the most significant impacts as much as possible.

As for the genetics, I wasn't aware of any other breed with Basenji traits. Thanks for letting me know! I can see how each of those breeds share traits, for sure!

@MrsCastro Oh, he is gorgeous for sure... I think he knows it, too... crazy nut! I'll try to keep you guys posted with some pics over time!

@NancySS We are quite lucky! Although we would consider it blessed, but I totally get what you mean! Thanks!

@basenjimom2 Thank you so much! (as if I had anything at all to do with his cuteness... lol)

Yeah, he should be super fun! He's already a great puppy, and doesn't have much of an issue with responding well to our leadership, even with our 4 (somewhat) young children.

I'm hoping we won't have to neuter him, but because he was a rescue from animal control, it was part of the agreement (I didn't know that until this evening).

@eeeefarm yeah, I did a bit of research and I’m already convinced. Unfortunately, because we rescued him from a animal control, we signed an agreement that we would have him sterilized. I’m going to try to ask if we can just do something like a vasectomy instead of fully neutering.

We may be able to get away without doing any of it if this virus situation continues... but if not, I’m at least going to practically beg them to let it wait til he is much more mature.

@kembe Thanks, Kembe! We agree... Super thankful we were able to save him from spending a single moment inside animal control!

Sorry in advance for the long post... my account is still "baby" status, so I can't post quickly, and I want to respond to each of you! Pics below!

@marcus Yeah, agreed! I know his breed doesn't technically matter (we're going to love him regardless), but it's still a fun exercise!

@elbrant I'm going to TRY... I prefer to upload directly to the post, but if that doesn't work, I'll link to a google drive folder with some pics if you guys are interested. I think I want to leave the mystery intact for a bit... we may try the DNA testing at some point in the future, if we get enough positive feedback on the potential for him being a Basenji from you guys, I guess... I looked up the AKC breed standard, and I think he has an almost box body (a bit long, I think?), but again, he's still a puppy, so I wasn't sure.

@DonC He's definitely super adorable! Sweet as can be, too, which is part of why I think he may not be Basenji... I've heard they have very inquisitive and assertive temperaments, which Copper only seems to exhibit shortly after he wakes up from a good sleep. His size is basically perfect for a Basenji, based on what I have been able to find online (estimated to be 13 weeks tomorrow, and weighs 10 pounds).

I've never heard the strong arguments for NOT spaying/neutering a dog... Could you please help me out with this? I've always heard vets and animal rights activists claim that is the most humane thing to do for animal growth control. I don't think I have a problem with keeping him natural, but I was trying to do some basic stuff that I figured was pretty normal. If I had solid scientific evidence to stand on, I'd never "fix" another animal again.

@joan-duszka Ah, are Basenji's supposed to have almond shaped eyes? If so, maybe the pictures at the bottom of this post will be more indicative for telling that trait... I'd like to see the scientific (non-activist) research on "fixing" pets. If you have a down-to-earth resource, that would be fantastic!

@MrsCastro OMG! If that's how Copper ends up looking, my wife will be super happy! She hasn't been aware of the Basenji breed before this, and she is now fascinated and hopes he turns out to have primarily Basenji traits.

Here's some updated pics... He's tough to keep still! He just woke up from his nap... 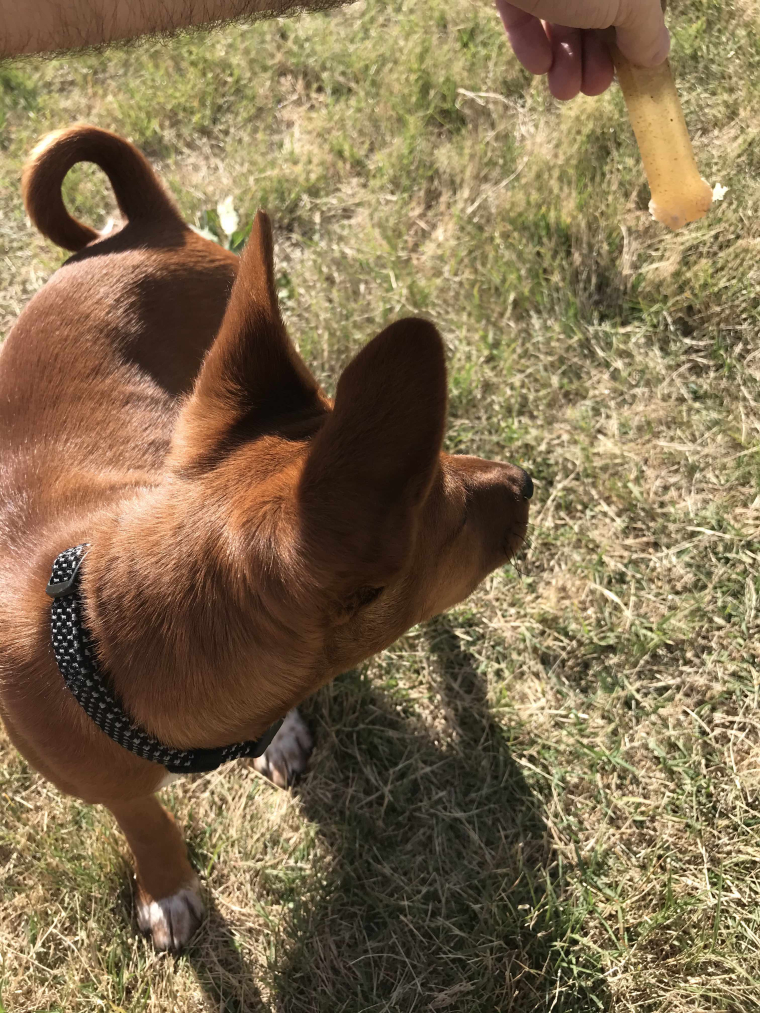 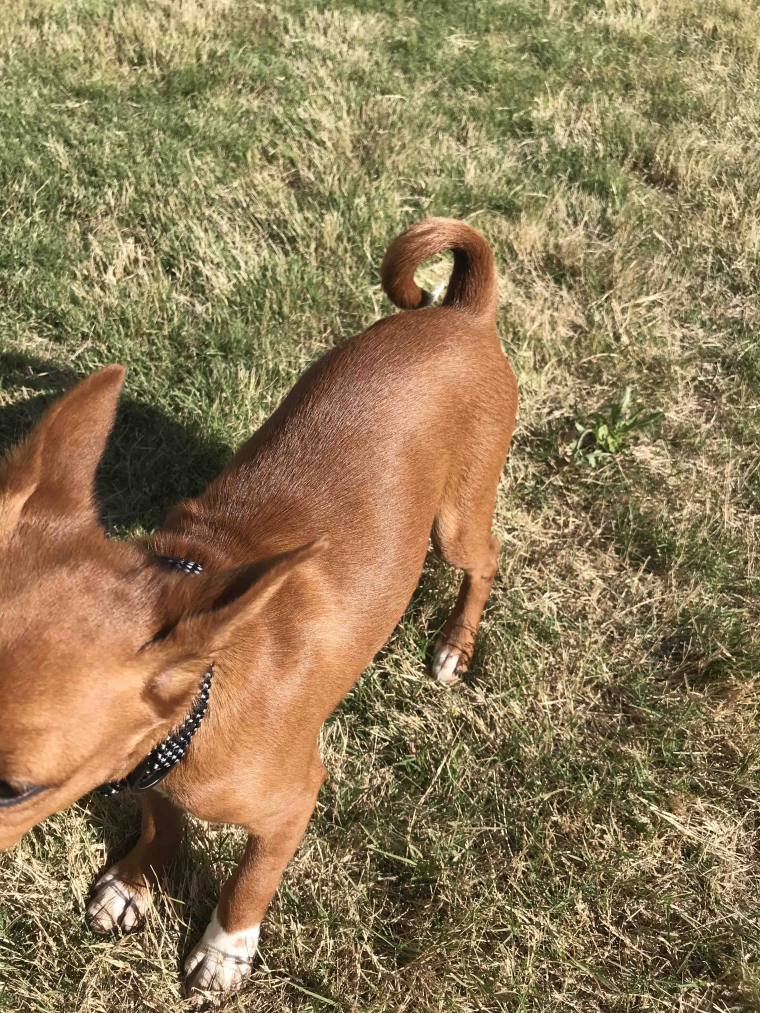 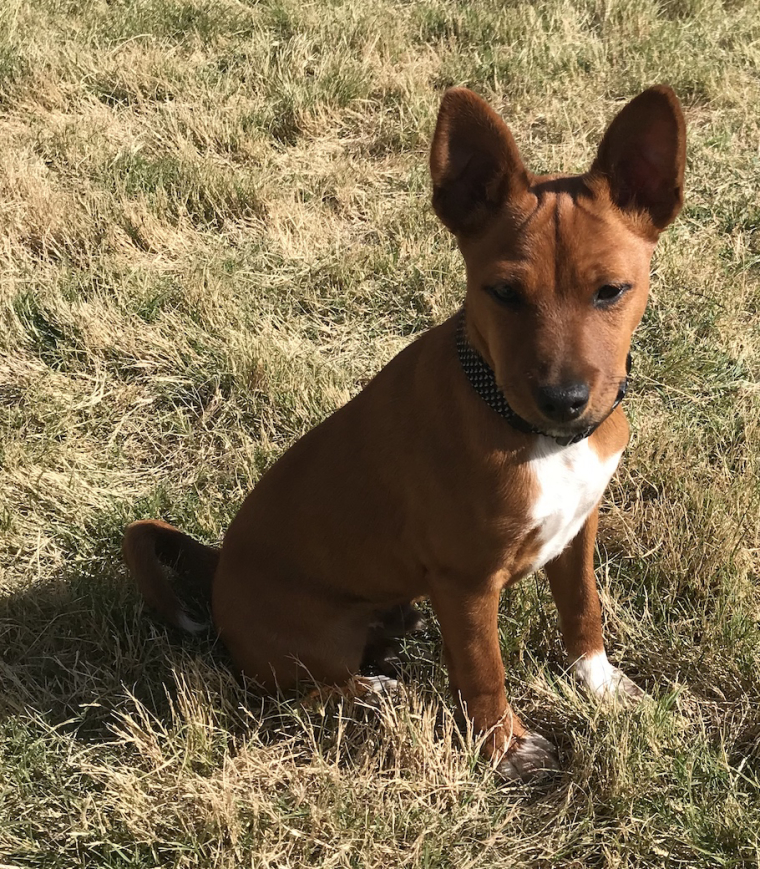 @tanza No, we don’t know the breeder. He was picked up by someone when he was running around out in the oil fields of west Texas. They surrendered him to animal control, and we were the first people to visit with him the day he became available.

I am not sure why I said “Basenji mix or mutt?”, lol. I realize if he is mixed, that’s technically a mutt... but in my mind, I was thinking many dogs are known mixes, but not what most people would call a mutt.

Does that make sense? In essence, my first dog was a 75% Rottweiler and 25% St. Bernard. He was a known mix, with a clear Rottweiler dominance. We are thinking our new puppy is primarily Basenji mixed with something else, but we also think it’s possible he is pure Basenji (or overwhelmingly so).

That’s really what I was trying to say... hopefully that makes more sense?

So I found this website a couple of years ago, when my wife and I were trying to figure out what breed of puppy we wanted to get for our family of 4 young children. At the time, I contacted a well-respected (as far as I could tell) Basenji breeder (I forget her name, but she was in Texas). She encouraged me to wait until my youngest was old enough to play properly with a puppy. Long story short, we found this little guy (Copper) at the local animal control office. They posted him on their Facebook page, and we got him the morning he became available for adoption! 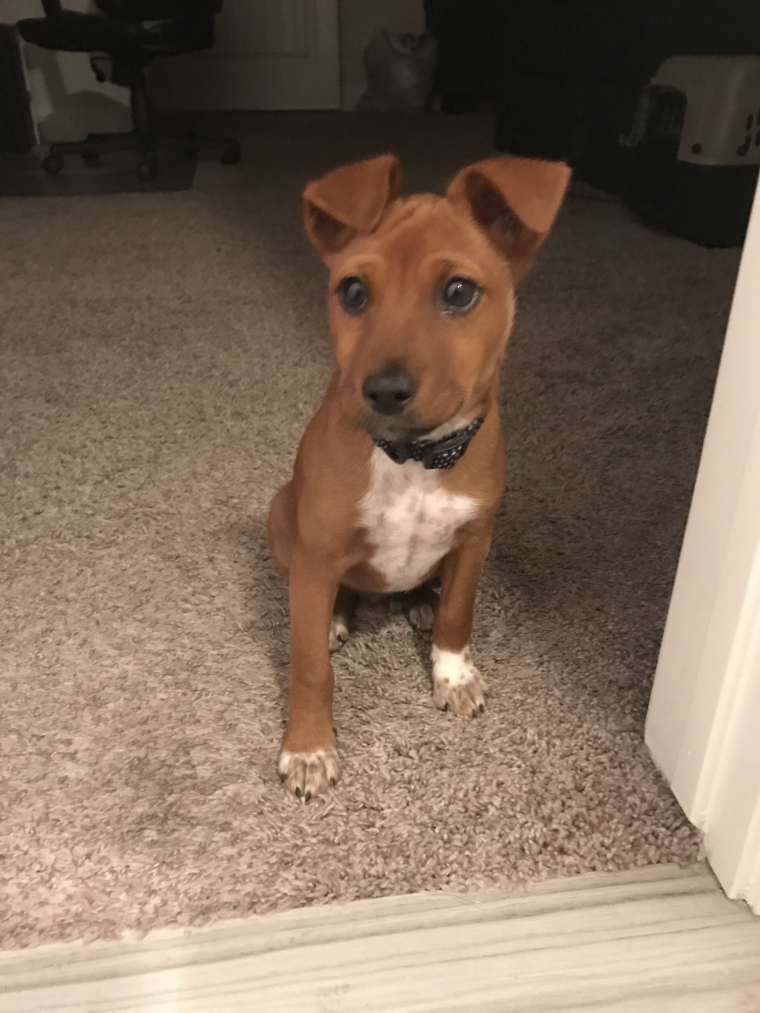 They estimated he was 10 weeks old (that was 3 weeks ago), and he now weighs right around 10 pounds (almost 13 weeks old now). As far as I can tell, he seems to be on track for a Basenji's weight growth for a male at this age (it's a guessing game). His ears almost always stay erect now (this is a 3-week-old picture). He doesn't bark unless he's playing rough with me, and he seems to really enjoy chewing and at first he bit rather hard when he played.

Fortunately, I have some experience with puppies, so the biting and rough play isn't a problem anymore, but it definitely was during the first week or so. He already knows how to sit, and we are working on lying down and letting go of whatever is in his mouth as well. He has an extremely proud gait and stance, and the tail curls like I would expect a Basenji's to curl.

Our dilemma is, we don't know if he has "disallowed" traits for Basenji's. We don't care about showing the dog, and plan to have him neutered in a couple of weeks, so breeding isn't something we're interested in either. However, it would be nice to know what kind of dog we're working with. Of particular interest to me is the spots on his chest and paws. I think he is a Basenji mix, because none of the other breeds with curled tails also have this short and smooth of a coat, but I have no idea what he could be mixed with.

What do you guys think? Do we have a Basenji mix or a mutt? (NOT that we care, we love him regardless!)